An Aurora police officer has stepped down following his involvement in a photograph taken at the site where 23-year-old Elijah McClain was arrested by police, according to an announcement by the department on Thursday.

“Jaron Jones, hired October 31, 2016, tendered his resignation,” the department tweeted. “Jones was one of the employees involved and depicted in the photograph investigation related to #ElijahMcClain. We will continue to update with developments as we proceed.”

According to a report by ABC 7 Denver, Jones submitted his resignation on Tuesday before he was handed down his discipline by the chief.

McClain was stopped by three white police officers on August 24, 2019, after reports of a suspicious person walking down a street wearing a ski mask.

Body-camera footage shows an officer getting out of his car, approaching McClain and saying, “Stop right there. Stop. Stop. … I have a right to stop you because you’re being suspicious.”

Police say McClain refused to stop walking and fought back when officers confronted him and tried to take him into custody.

In the video, the officer turns McClain around and repeats, “Stop tensing up.” As McClain tries to escape the officer’s grip, the officer says, “Relax, or I’m going to have to change this situation.”

As other officers join to restrain McClain, he begs them to let go and says, “You guys started to arrest me, and I was stopping my music to listen.”

One of the officers put McClain in a chokehold, which cut off blood flow to his brain.

Paramedics gave him 500 milligrams of the sedative ketamine to calm him down, and he suffered cardiac arrest on the way to the hospital. McClain was declared brain dead Aug. 27 and was taken off life support three days later. 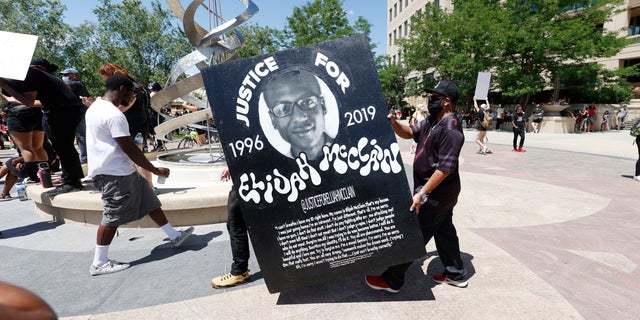 In this June 27, 2020, file photo, demonstrators carry a giant placard during a rally and march over the death of 23-year-old Elijah McClain outside the police department in Aurora, Colo. Multiple suburban Denver police officers have been placed on paid administrative leave amid an investigation into photos of them related to the case of a Black man who died last summer after he was stopped and restrained, police said Monday, June 29, 2020. (AP Photo/David Zalubowski, File)

The surfaced photo reportedly shows three officers mimicking the chokehold McClain was put in before he died. Sources told the ABC 7 Denver that the photograph was sent in a group text among officers in 2019.

Following the photo being reported to the Aurora Police Department, three officers, including Jones, were placed on administrative leave pending an investigation.

Aurora police told ABC 7 Denver that the city mandates that details or documents relating to the investigation cannot be released until the end of a 72-hour window set to end on Friday afternoon.

Sources told the outlet that the city is expected to announce details of the investigation and punishments on Friday.

The Aurora Police Department did not immediately return Fox News’ request for comment.