Thousands of beachgoers began flocking to the shores Friday to kick off the Fourth of July weekend despite a nationwide resurgence in coronavirus cases that has prompted holiday beach closures in some of the hardest-hit areas and other restrictions to prevent more infections.

In Chicago, beaches are officially closed through the weekend but Foster Beach was packed as many took in the sun on Lake Michigan, WLS-TV reported. Beachgoers gathered at South Carolina‘s Myrtle Beach while largely ignoring social distancing measures, according to TMZ.

In New Jersey, large crowds are expected at the Jersey Shore, which has raised concerns from locals over tourists not following safety protocols.

“We’re seeing spikes across the country in states that opened up weeks ago, and while we’re doing a good job in New Jersey, there are a lot of people that are way too cavalier about social distancing,” said Paul Kanitra, mayor of Point Pleasant Beach, N.J., a popular summer destination. “There’s inherent risk in all of this.”

Florida attorney Daniel Uhlfelder donned his infamous Grim Reaper outfit and took to a Jacksonville beach to warn beachgoers of the risks of gathering in close proximity.

“Jacksonville Beach was brimming with people today many of whom were misinformed,” he tweeted.

COVID-19 infections are up in at least 40 states as the country heads into what will be a very different holiday weekend. Public health officials have warned that large gatherings could exacerbate the outbreak following weeks of progress that has essentially been erased in many areas.

As of Friday, the U.S reported more than 2.7 million cases and over 129,000 deaths, according to Johns Hopkins University. While infections have soared, the death rate has remained flat. U.S. Surgeon General Jerome Adams said Friday that “deaths lag at least two weeks and can lag even more.”

“In the beginning, nursing homes were hit really hard, and the majority of our deaths were occurring on people who were 60, 65 and older,” he said during an appearance on “Fox & Friends.” “Now the majority of cases are in people who have an average age of 35, and so those folks are going to have less comorbidities, they’re going to be less likely to end up in the hospital and to die.”

In many regions where infections have soared after phased reopenings, beaches have been shut down for the next four days over fears of more infections. Health officials are urging Americans to stay home and limit their activity and contact with people who live outside their households.

In California, public beaches across the state are closed through Monday, along with beach parking lots and garages in an effort to prevent a repeat of Memorial Day weekend when thousands of people congregated near each other. Across 19 counties, bars, movie theaters, zoos, museums and other business sectors were ordered closed for at least three weeks.

Several Texas municipalities placed restrictions such as closing access points to beaches and park closures. In Port Aransas, a curfew on beaches has been imposed and well as a prohibition on vehicles driven on the beach.

Gov. Greg Abbott, a Republican, ordered the wearing of face coverings in public in counties with 20 or more COVID-19 cases. The directive came after an aggressive reopening that has since been scaled back.

In Miami, a normally busy South Beach was dead Friday amid its beach closure. Miami-Dade County Mayor Carlos Gimenez issued an executive order this week closing all beaches until Tuesday. Other counties like Broward and Palm Beach have done the same. 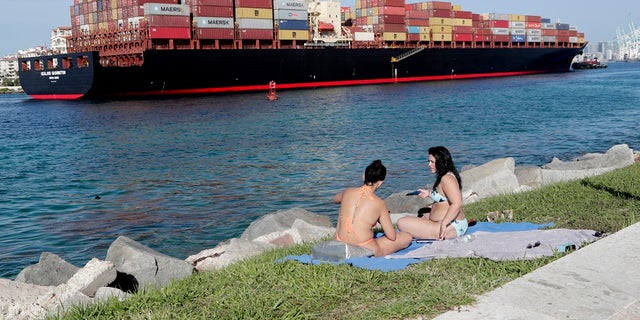 Women sunbathe on a strip of grass along Government Cut as a container ship passes by during the new coronavirus pandemic, Friday in Miami Beach, Fla. Beaches throughout South Florida are closed for the busy Fourth of July weekend to avoid further spread of the new coronavirus. (AP Photo/Lynne Sladky)

Gimenez also mandated that masks be worn inside businesses and outside whenever social distancing is not possible.

“If people are not going to be responsible and protect themselves and others from this pandemic, then the government is forced to step in and restore common sense to save lives,” the mayor said in a statement earlier this week.

Colleges want in-person teaching for fall semester, but professors are pushing back