Trump speaks at Mount Rushmore, will condemn 'merciless campaign to wipe out our history' 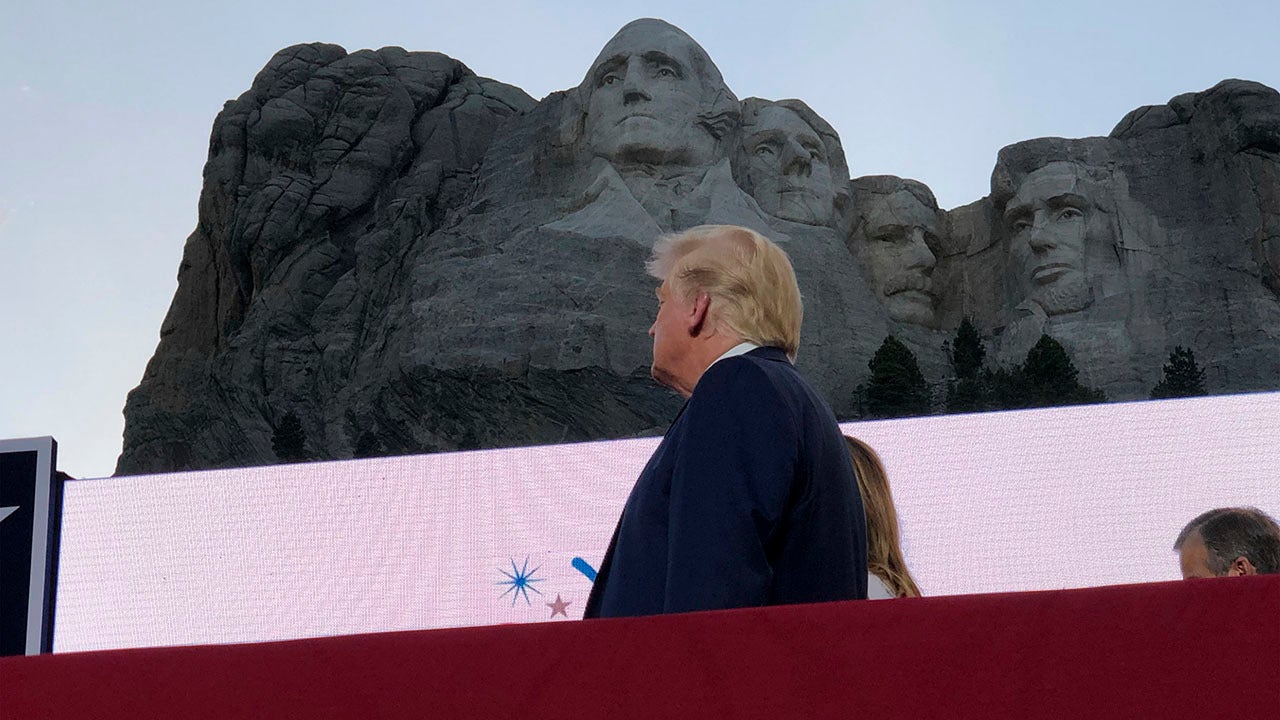 President Trump took the stage in the shadow of Mount Rushmore on Friday night to condemn what he described as a “merciless campaign to wipe out our history, defame our heroes, erase our values, and indoctrinate our children” in an address to mark the beginning of Independence Day weekend.

“This monument will never be desecrated,” the president vowed early in his speech.

The president also castigated left-wing activists and practitioners of so-called “cancel culture” who have targeted statues and monuments of historical figures across America in recent weeks.

“This movement is openly attacking the legacies of every person on Mount Rushmore …” Trump said. “Those who seek to erase our heritage want Americans to forget our pride and our great dignity, so that we can no longer understand ourselves or America’s destiny. In toppling the heroes of 1776, they seek to dissolve the bonds of love and loyalty that we feel for our country, and for each other.”

TRUMP TO KICK OFF INDEPENDENCE DAY WEEKEND AT MT. RUSHMORE AMID ANTI-MONUMENT PUSH FROM ACTIVISTS

“They would tear down the beliefs, culture, and identity that have made America the most vibrant and tolerant society in the history of the earth,” he added.

“You can expect the president to express strong support for America’s military, the men and women of our police, and so many of our cherished principles and institutions that are under attack daily from the left,” a senior administration official said in a statement Friday evening.

Trump’s speech will be followed by a firework display above the iconic monument in the Black Hills. A reported 7,000 tickets have been distributed for the event, and South Dakota Republican Gov. Kristi Noem has promised that social distancing guidelines will not be enforced.

Trump has been criticized on several fronts for holding such an event during nationwide protests over alleged systemic racism and white supremacy in America following the death of George Floyd in Minneapolis police custody May 25.

In some cities, demonstrators have torn down, vandalized or called for the removal of statues and monuments depicting Confederate figures, as well as such diverse non-Confederate figures as Abraham Lincoln, Ulysses S. Grant, George Washington, Christopher Columbus and Theodore Roosevelt.

In addition, some Native American groups are using Trump’s visit to protest the Mount Rushmore memorial itself, pointing out that the Black Hills were taken from the Lakota people against treaty agreements.

Hours before the event, protesters blocked a road leading to the monument. Authorities worked to move the demonstrators and about 15 protesters were arrested after missing a police-imposed deadline to leave.

The event has also come under scrutiny for the lack of social distancing during the ongoing coronavirus pandemic. State officials have asked those who feel ill or are in high-risk groups to watch the festivities at home.

“Masks will be available, first off. They are not required but people will be able to have them if they don’t have one with them when they come,” South Dakota Attorney General Jason Ravnsborg told “Fox & Friends” Friday. “And, I think that we have done a number of things to mitigate the spread of the COVID.”

Steve Allender, the mayor of nearby Rapid City, said that he doesn’t necessarily believe the measures are enough, as he is doubtful that attendees will “disqualify themself because they developed a cough the day of or the day before.”

The small town of Keystone, which lies a couple miles from the monument, was buzzing with people Friday hoping to catch a glimpse of the fireworks and the president. Many wore pro-Trump T-shirts and hats. Few wore masks.

“This is going to rank up in the top Fourth of Julys that I talk about,” said Mike Stewhr, who brought his family from Nebraska.

Mike Harris of Rapid City said he was a Republican but wore a mask and waved an anti-Trump flag. He also was sporting a handgun on each hip. He said he was worried the event would spark a COVID-19 outbreak.

“I think it’s a bad example being set by our president and our governor,” Harris said.

Robin Pladsen, director of the Keystone Chamber of Commerce, handed out face masks and hand sanitizer from a tent. She said the tourist influx would help businesses pay back loans they had taken out to survive the economic downtown but acknowledged the health risk for the town.

Several people who once oversaw fire danger at the national memorial have said setting off fireworks over the forest is a bad idea that could lead to a large wildfire. Fireworks were called off after 2009 because a mountain pine beetle infestation increased the fire risks.

Noem pushed to get the fireworks resumed soon after she was elected, and enlisted Trump’s help. The president brushed aside fire concerns earlier this year, saying, “What can burn? It’s stone.”

Fox News’ Adam Shaw and John Roberts and The Associated Press contributed to this report.