Florida health officials recorded another record-breaking day, as cases of coronavirus spiked to their highest numbers yet in both Miami-Dade and Broward County on Saturday.

HOW FOURTH OF JULY IN 2020 WILL BE UNLIKE ANY OTHER: NO BEACH, NO BOOZE, NO BBQ

Despite beach closures ahead of Fourth of July weekend to prevent large crowds from congregating, there were 2,418 new cases of coronavirus in Miami-Dade County on Saturday.

Miami Beach Mayor Dan Gelber chastised residents for “not listening” and refusing to adhere to social distancing protocols and mask mandates that have been in effect for weeks.

“For some people, they’re listening to mixed messages from Washington and they’re deciding they don’t need to wear a mask,” Gelber told Fox News’ Neil Cavuto in an interview on “Cavuto Live,” Saturday. 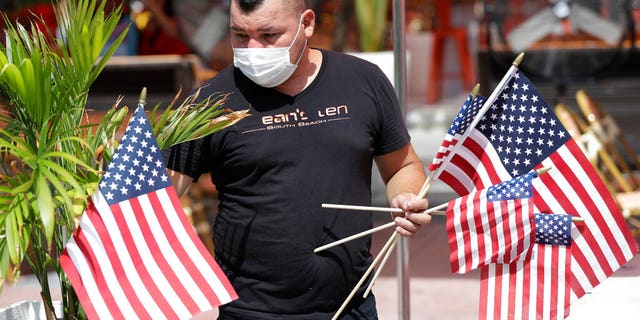 In Broward County, there were 1,346 new cases recorded, the Florida Department of Health said, bringing the county’s total to 19,575.

State totals jumped over 11,000 cases, bringing Florida’s caseload to 190,052. Hospitalizations were up by 585 people and health officials said 14 percent of Floridians have been infected COVID-19. The current national rate of positive tests is 7.5 percent, according to Johns Hopkins University.

In addition, 18 more people died in Florida, as the death toll ticked up to 3,702 people.

“We have a very serious health care issue,” Gelber said. “We have over 1,400 people in our hospitals right now. Our intensive care is increasing. Our people on vents is increasing. We can’t just ignore that.”

Gelber received backlash from residents as he tightened restrictions in his city, halting phased reopenings and implementing a curfew in an attempt to bring the spike in new cases down. In addition, restaurant-goers were ordered to wear a mask throughout their entire meals, only taking it off to eat and drink.

A group of people, wearing face masks to prevent the spread of the coronavirus, walk along a beach path on Miami Beach, Florida’s famed South Beach, July 4, 2020.  (AP)

Gelber said the measures were necessary and fought back against assertions that the limitations were an infringement on basic rights.

“There’s nothing more American than sacrificing for your loved one, for a neighbor or for a stranger. And it’s time that people just follow these guidelines. Wear a mask. It’s not a political statement,” he said.

As Florida struggled through the July 4th weekend, so did other states in the country.

Alabama this week also set a record for infections reported in a day, with more than 1,700 new confirmed cases recorded Thursday, and state health officials worried that the holiday weekend could lead to the type of spike that followed Memorial Day weekend.