Talk about a close call.

A highway trooper in Oklahoma had a near miss last week while helping a driver when a bolt of lightning struck nearby.

The Oklahoma Highway Patrol said on Facebook the incident happened on Thursday along the Turner Turnpike/Interstate 44 between Bristow and Stroud, located southwest of Tulsa.

According to a short statement, the trooper had pulled over to “assist with some equipment that had fallen off a trailer,” when the bolt hit the highway.

Dashcam video shows the moment the bolt of lightning strikes near the roadway as the officer walks nearby. 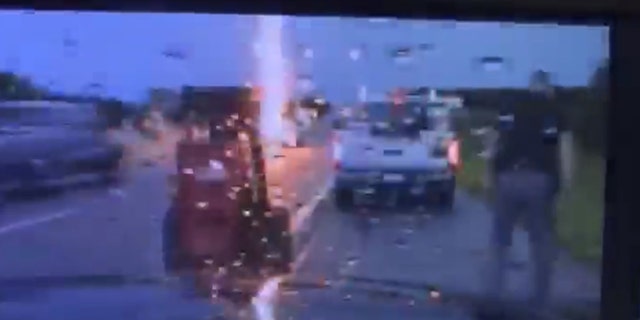 “Woah! That was close!” the highway patrol said.

It did not appear the officer suffered any injuries.

LIGHTNING SAFETY: THESE ARE THE STATES WITH THE MOST FATALITIES

Last year there were just 21 lightning-related fatalities, down from an average of 55 deaths per year in 2001.

The number of lightning fatalities from 2010 to 2020. (Courtesy National Lightning Safety Council)

Jensenius said he’s found that people still believe lightning is attracted toward metal, even though it typically strikes the tallest object in the area. People would believe that having jewelry or metal in their pockets would somehow make them more susceptible to being struck.

“It’s simply the fact that they are outside,” he said.

Another myth is that rubber protects someone from lightning, since being in a vehicle during a thunderstorm is safer than being outside. But according to Jensenius, that’s due to a hard-topped metal vehicle and its metal shell being able to distribute the electric charge if it’s struck.

People also misjudge their distance from approaching storms, thinking that the lightning rise may be much farther away than it actually is.

“They are in danger as soon as they hear a distant rumble of thunder,” he said.