Man in famous 9/11 photo dies from coronavirus in Florida

A New York man who was captured in a famous 9/11 photo passed away in Florida due to coronavirus.

Stephen Cooper was 60 years old when he ran away from the crumbling south tower of the World Trade Center on Sept. 11, 2001. He and several other men were photographed as they sprinted down the block, Cooper cradling a manila envelope under his arm. 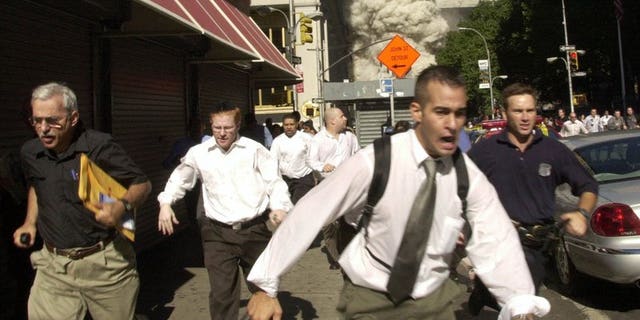 In this Sept. 11, 2001, file photo, people run from the collapse of one of the twin towers at the World Trade Center in New York. Stephen Cooper, far left, fleeing smoke and debris as the south tower crumbled just a block away on Sept. 11, has died from coronavirus, his family said, according to The Palm Beach Post. (AP Photo/Suzanne Plunkett, File)

The photo, captured by Associated Press photographer Suzanne Plunkett, ran in magazines and newspapers all over the world. Cooper stumbled across the photo of himself in an issue of Time magazine.

“He didn’t even know the photograph was taken,” Janet Rashes, Cooper’s partner for 33 years, told The Palm Beach Post. “All of a sudden, he’s looking in Time magazine one day and he sees himself and says, ‘Oh my god. That’s me.’ He was amazed. Couldn’t believe it.”

The Palm Beach Post ran a profile on Cooper as part of its memorial series, “The Ones We Lost,” after learning he had passed away on March 28 due to coronavirus. Cooper, who was 78, lived part-time in the Delray Beach area.

On 9/11, Cooper was headed to the World Trade Center to deliver some files, arriving shortly after the planes had already struck. As he approached, a police officer told him, “You have to run.”

Moments later, the tower collapsed, kicking up a cloud of dust and debris that can be seen in the background of the photo. Cooper fled to a nearby subway station.

Susan Gould, a longtime friend of Copper, said he shrank a copy of the photo, laminated it, and kept it in his wallet.

When he took up residence in an apartment west of Delray Beach, he started to suffer from coronavirus symptoms, but was instead diagnosed with chronic obstructive pulmonary disease.

“At that point, the coronavirus was being spoken of, but the people at the hospital weren’t wearing masks,” Rashes said. ″(Paramedics) picked him up on March 23. That’s the last time I saw him.”