A woman struck by a vehicle that drove onto a closed Seattle freeway early Saturday and plowed into a crowd of protesters has died, while a second woman remains in serious condition, officials said.

2 WOMEN STRUCK BY CAR ON SEATTLE HIGHWAY AMID PROTESTS

Taylor and Love were struck at about 1:40 a.m. when a white Jaguar sped into the group protesting police brutality on Interstate 5, according to a police report released by the Washington State Patrol. 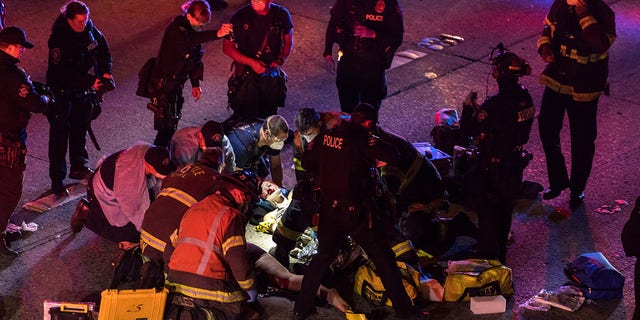 Emergency workers tend to an injured person on the ground after a driver sped through a protest-related closure on the Interstate 5 freeway in Seattle early Saturday. (James Anderson via AP)

Before the news of Taylor’s death, the Washington State Patrol tweeted late Saturday that it will no longer allow protesters on I-5, arresting all pedestrians found walking on the freeway. The patrol said the move was for the safety of all citizens.

Authorities have closed I-5 several times amid the unrest, with Washington State Patrol Capt. Ron Mead telling reporters that protesters had shut down the interstate for 19 days in a row.

“My hope is, as a result of this tragedy, protesters will reconsider their desire to be on the interstate because I cannot guarantee their safety, plain and simple,” Mead said.

Video of the crash on social media showed a white car striking the women, who flew into the air before landing on the ground. Protesters can be heard shouting “Car! Car!” before running for safety.

Dawit Kelete, 27, has been arrested and booked on two counts of vehicular assault in connection to the incident, authorities said. (James Anderson via AP)

The driver, identified as 27-year-old Dawit Kelete, of Seattle, fled the scene after hitting the protesters, Trooper Chase Van Cleave told The Associated Press. A protester jumped in a car and chased Kelete for about a mile. The protester was able to pull his car in front of the Jaguar to stop the vehicle.

Troopers arrived and took Kelete, who was alone, into custody, Mead said. The state patrol shared two pictures of the driver’s car with significant damage to its bumper and windshield.

Kelete was booked into the King County Correctional Facility on Saturday morning on two counts of vehicular assault. Bail was denied. He faces a second court hearing on Monday at which the judge will determine if he can be released on bail, according to court documents.

Kelete was described by offices as reserved and sullen when he was arrested, according to the documents, and asked if the pedestrians were OK.

Police are investigating a motive and where Kelete got onto the interstate, which authorities had closed more than an hour before the protesters were hit. It was unclear whether it was a targeted attack, Mead said, adding that drugs and alcohol were not considered factors.

“No one should risk their life for demanding better from our city, state and country,” Durkan tweeted.

Protests in Seattle have been ongoing in the wake of George Floyd’s death in Minneapolis, which triggered a nationwide movement condemning police brutality and racial inequality.

Dozens of protesters were arrested last week after authorities cleared the “Capitol Hill Organized Protest” zone Wednesday morning following the two fatal shootings of teenagers and other violent incidents to happen in the area since the occupation began June 8.

Fox News’ Vandana Rambaran and The Associated Press contributed to this report.