“The purpose is to show an unambiguous signal to our partners and allies that we are committed to regional security and stability,” Rear Adm. George Wikoff told the Wall Street Journal, which was the first media to report the exercises likely to irk Beijing.

The drills, to support a free and open Indo-Pacific and promote an international rules-based order, also included “round-the-clock flights testing the striking ability of carrier-based aircraft,” he added.

The South China Sea is where China is pitted against smaller neighbors in multiple territorial disputes over islands, coral reefs and lagoons. The waters are a major shipping route for global commerce and are rich in fish and possible oil and gas reserves. 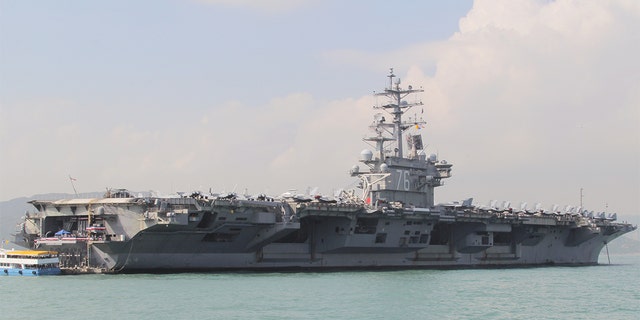 China’s People’s Liberation Army had been staging exercises off the Paracel Islands in the disputed South China Sea since July 1, angering the Philippines, and Chinese maritime officials have prohibited all vessels from navigating within the area of the maneuvers.

In another message to China, a B-52 bomber from Louisiana flew a 28-hour mission to train with jets from the aircraft carriers Reagan and Nimitz in the South China Sea, according to the Air Force.

Elsewhere in the fleet, the USS Dwight D. Eisenhower has been at sea now for over 169 straight days since leaving Norfolk in January. Other warships in the Ike strike group have also been underway for at least five months.

Fox News’ Lucas Tomlinson and The Associated Press contributed to this report.