The fire that engulfed the amphibious assault ship USS Bonhomme Richard for more than four days was contained Thursday, leading the Navy to begin investigating how a fire spread so aggressively on the ship while it was in port.

The ship suffered extensive damage, including to its skin, officials said, and the fire sent plumes of smoke billowing into the air above San Diego, where it was docked. As firefighters battled the blaze, the 40,000-ton ship listed toward both its port and starboard sides, the Navy said, likely due to the massive quantities of water poured into the hull, the Journal reported.

The Navy said it walked through the ship Thursday in search of remaining hot spots. Officials have yet to determine how the fire ignited and whether the ship can even be saved. 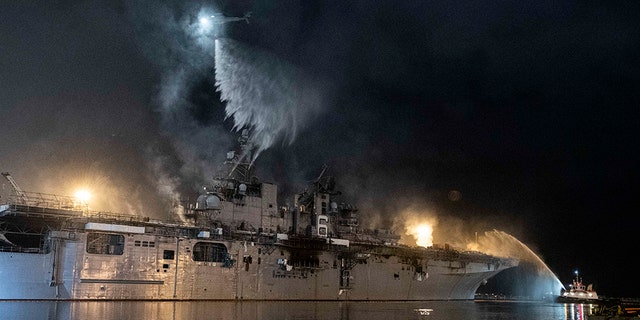 “We do not know the extent of the damage… We cannot make any conclusions until the investigation is complete,” Rear Adm. Philip E. Sobeck, the commander of Expeditionary Strike Group 3 said.

The ship, commissioned in 1998, is about halfway through its expected lifespan. Repairing it would likely take months and cost hundreds of millions of dollars, Navy officials said. Should the Navy choose to decommission the ship, it would have a major impact on its operations as it would take years to build a replacement. Moreover, the USS Bonhomme Richard is among the few such ships from which an F-35 Joint Strike Fighter can take off, enabling it to operate like a mini aircraft carrier.

The Navy also must determine how much responsibility the ship’s crew and the shipyard workers bear for the start of the fire and the effort to contain it. The Navy is supposed to have watch crews for the ship while it is under maintenance as well as fire crews nearby, in part because there are fewer sailors aboard to spot any problems.

“This should have been completely preventable because the Navy is supposed to have good practices for stowage aboard ships,” said Bryan Clark, a senior fellow at the Hudson Institute. “If a fire breaks out, the Navy should be able to fight it immediately.”