A North Carolina group is using a billboard to post the message, “Black Lives Matter,” in counterprotest to a Confederate flag right next to it.

The billboard stands along a highway in Pittsboro, just beside a flagpole bearing a Confederate flag. Sam White, who owns both the flagpole and the billboard, said he agreed to raise the flag after the city last year removed a Confederate statue that stood in front of the Chatham County Courthouse.

“Friends called and asked if they could put a Confederate flag on my property,” White said. They did it “because the county commissioners had removed the Confederate statue.”

White leased the billboard to Lamar Advertising, and local activist groups seized the opportunity to post a message in defiance of the flag. The billboard now reads “Black Lives Matter.” 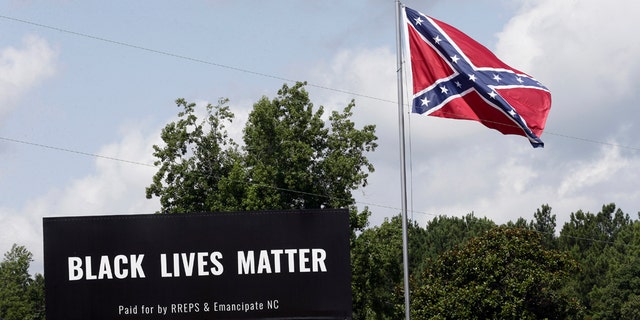 A Black Lives Matter billboard is seen next to a Confederate flag in Pittsboro, N.C., July 16. A group in North Carolina erected the billboard to counter the flag that stands along the road. (AP Photo/Gerry Broome)

The groups Recidivism Reduction Educational Program Services (RREPS) and Emancipate NC started a GoFundMe to buy the space, and succeeded in raising the required $10,000 through community support. The group believes that the sign will stand for a year, the News & Observer reported.

The original goal of the billboard was to show that Confederate flags “do NOT represent” Pittsboro, according to the GoFundMe page.

“Shoutouts To The Community Of Pittsboro That Came Together To Make This Happen,” RREPS founder Kevin Pittman wrote on Facebook.

During a phone interview with the News & Observer, Pittman said the community “wanted it to be known not only to the Confederate supporters, but also as well as the individuals … in the town that are Black, that they are supported, that their lives matter.”

“The money for putting up this billboard would have fed a lot of starving and homeless people,” one Facebook user commented on the page of ABC11.

He believes the sign will be taken down after the lease for Lamar Advertising ends in August, according to FOX 8.