An Illinois woman was sentenced Friday to 35 years in prison in the beating death of her 5-year-old son who prosecutors said had endured years of abuse for most of his young life.

JoAnn Cunningham pleaded guilty to first-degree murder last year in the death of her son, Andrew “AJ” Freund Jr., who was found wrapped in plastic in a shallow grave near the family’s Crystal Lake home.

“I had the privilege of having AJ as my son,” Cunningham told a judge Thursday, during the first of a two-day sentencing hearing, according to FOX 32. “I loved him, I miss him.”

During his remarks, Wilbrandt acknowledged Cunnigham’s life of drug addiction. 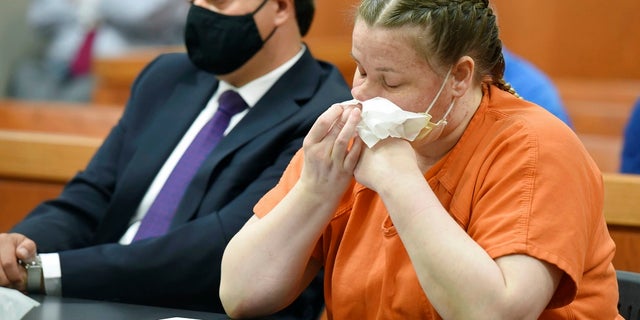 JoAnn Cunningham cries and wipes her nose during her sentencing hearing Thursday, July 16, 2020, in Woodstock, Ill. Cunningham pled guilty in December to killing her five-year-old son Andrew “A.J.” Freund in April 2019 in her Crystal Lake home. She was sentenced Friday to 35 years in prison. (John Starks/Daily Herald via AP, Pool)

“She lapsed back into living in what can only be described as drug-addled filth — lying, cheating and manipulating her way through life while terrorizing her small son,” he said. “While her addictions do not justify her appalling behavior towards her own son, they perhaps do help explain why she engaged in … the inhumane, repulsive and frankly shocking course of conduct that ended her child’s young life.”

Family members expressed disappointment with the sentence, according to a statement released by their attorney.

“AJ was an innocent, precious little boy whose life was taken from him after he endured, what we now know, was much pain and suffering,” the statement said. “We had expected JoAnn would pay for that by spending her natural life in prison.”

The child endured years of physical and emotional abuse at the hands of his mother, prosecutors said. When he was born, tests revealed he and Cunningham both had opiates in their systems, prompting the state to take the baby into custody. He was returned 20 months later.

Child welfare workers visited the family’s home over the years but found no reason to remove him.

A police officer who went to the family’s home after AJ was reported missing described the stench of the garbage-strewn house.

A cellphone video from Cunningham’s phone showed AJ laying naked on a mattress with bruises and bandages on his body, according to reports by Fox 32.

A woman who police say is Cunningham can be heard yelling at him for wetting the bed.

The boy’s father, Andrew Freund Sr., led police to his son’s body when confronted with the video. Court documents show the boy died from blunt force trauma and had bruising that matched the marks of a detachable showerhead.

Prosecutors said the boy was forced to stand naked under freezing cold water and was beaten in the bathroom. Freund Sr. admitted to storing his son’s body in a plastic container in a basement with the intention of burying him later.

He has pleaded not guilty first-degree murder and is awaiting trial.

Fox News’ Vandana Rambaran as well as The Associated Press contributed to this report.

Oregon cop shot and a suspect is in custody: police