An Indiana prosecutor has brought criminal charges in the case of a Black man who accused a group of white men of attempting to lynch him at a lake in an incident caught on video that went viral.

Arrest warrants were issued Friday for Sean Purdy and Jerry Cox II on charges of assaulting Vauhxx Booker at Lake Monroe on the Fourth of July.

“After a review of the full and complete investigation by [Indiana Department of Natural Resources] Law Enforcement, the Monroe County Prosecutor’s Office believes that the above listed charges are supported by probable cause, that admissible evidence will be sufficient to support conviction beyond a reasonable doubt, and that the decision to charge is in the interests of justice,” chief prosecutor Erika OliphanOliphant said.

Booker is a civil rights activist and member of the Monroe County Human Rights Commission.

The 50-second video shows Purdy restraining Booker against a tree. 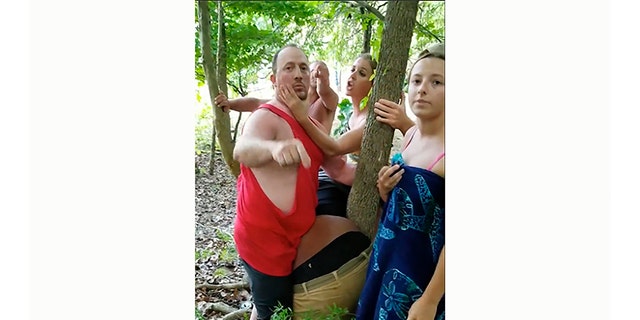 In this July 4, 2020, image taken from video provided by Brennan Golightly, a group of people surround Vauhxx Booker, center, as he is bent over leaning against a tree, at Monroe Lake near Bloomington, Ind. Two men are facing charges after Booker said a group of white men assaulted him in Indiana and threatened to “get a noose” after claiming that he and his friends had trespassed on private property. Monroe County prosecutors on Friday, July 17, 2020, charged Sean Purdy, left, with felonies of criminal confinement, battery resulting in moderate bodily injury and intimidation.

Booker said the men threatened to break his arms and said, “Get a noose,” while telling his friends to leave the area. Booker said one of the men wore a hat decorated with a Confederate flag and that the men made statements about “white power.”

The incident began with the group accusing Booker of trespassing on private property.

Defense attorney David Hennessy said at a press conference Tuesday that Purdy had been “falsely accused.”

He had no immediate comment about the charges, the Associated Press reported.

It was unknown if Cox had a lawyer.

“We will watch closely to ensure that the individuals arrested for perpetrating this disgusting and sickening attack against Mr. Booker are duly punished,” she said.