Pennsylvania prosecutors on Friday said a police officer was justified when he pressed his knee on a suspect’s head while restraining him, an incident that immediately drew comparisons to the police encounter that led to the death of George Floyd.

“I have concluded that there is absolutely no evidence to support filing criminal charges against either of the Allentown police officers involved in this incident,” Martin said in a news release.

The officers were waiting outside the Sacred Heart Campus of St. Luke’s Hospital for the results of a COVID-19 test for a criminal suspect arrested earlier in the day when they spotted Borrero stumbling and vomiting, Martin said. 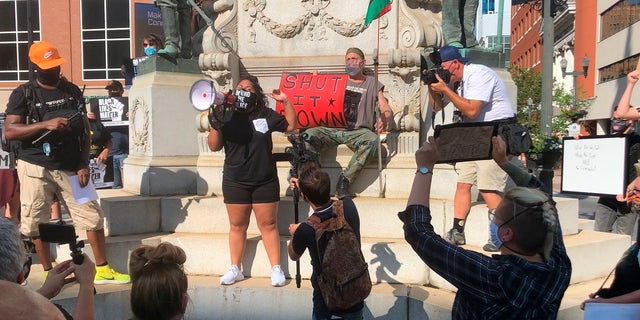 Activist Maegan Llerena addresses a crowd of protesters in Allentown, Pa. who gathered Monday, July 13, 2020, to demand accountability from police after video emerged of an officer placing his knee on a man’s head and neck area outside a hospital. Police have launched an internal probe. (AP Photo/Michael Rubinkam)

The officers tried to detain him and took him to the ground after he began acting aggressively.

Cellphone footage shot from a vehicle that passed by the incident shows three Allentown officers restraining a man on the ground. One officer pins his arm onto Borrero’s head steps away from an emergency room entrance as they try to subdue him.

“An officer then moved his knee to Mr. Borrero’s head (not his neck) in order to place him into emergency immobilization so as to safely, efficiently and effectively keep him from moving his body to avoid being handcuffed and placed into custody,” Martin said. “Once that was accomplished, the officer immediately removed his knee from Borrero’s head, but very briefly, had to put it back on his head again, while Borrero was spitting at the officers.”

The clip immediately drew comparisons to Floyd, who died while in the custody of four Minneapolis police officers. One officer, Derek Chauvin, pressed his knee on Floyd’s neck for nearly nine minutes. All four were fired from the force and face criminal charges.

A video of the May 25 incident set off a firestorm of criticism and helped to spark global protests and riots that have since prompted local governments to enact law enforcement reform measures and in some cases consider defunding police departments.

Ben Crump, the attorney for Floyd’s family, tweeted a video of the Allentown encounter earlier this week, likening the officers’ actions to those involved in Floyd’s death.

“GRAPHIC VIDEO: @AllentownPolice held down this man’s face to the pavement and then one of its officers placed their knee on his neck!! This happened yesterday and is exactly what led to #GeorgeFloyd’s death. We need this officer’s name and badge # NOW. #ICantBreathe,” he wrote.

Earlier this week, the Allentown Police Department said the encounter was being investigated. Local activists have demanded the officer be fired and face criminal charges.