Hundreds of protesters took to the streets surrounding a Portland, Ore., police precinct on Thursday night, blocking traffic and chanting about burning it down, according to social media and a local report.

Local FOX affiliate KPTV reported the group made its way to the front of Portland Police Bureau’s East Precinct in central Portland early Thursday night, where they crowded the street as they chanted and played music.

Authorities told the outlet someone lit a small fire in the street, while other protesters entered the police property.

Police originally said they had no plans to engage with protesters, but changed their tune less than an hour later, shortly before 10 p.m. local time, when a department tweet announced that they had heard people from the crowd discussing their desire to “enter the property and burn down the precinct.”

Approximately two hours later, police said the protest had been classified as an unlawful assembly and anyone who refused to leave would be subject “to arrest or use of force.”

It was not immediately clear how many arrests, if any, were made.

The protest at the precinct was one of two demonstrations that took place on Thursday.

Several dozen people also gathered near the federal courthouse, news outlets reported and the crowd grew as the night progressed, according to The Oregonian. 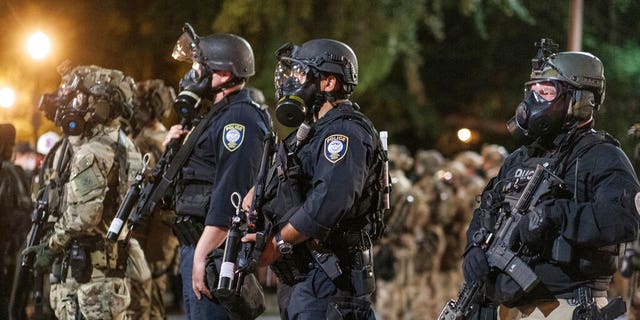 In this photo provided by Doug Brown, agents from different components of the Department of Homeland Security are deployed to protect a federal courthouse in Portland, Ore., on Sunday, July 5, 2020. (Doug Brown via AP)

Over the course of the night, federal officers fired less-lethal rounds, and deployed tear gas to break up the crowd and push people away from the federal buildings. Video showed many protesters leaving the area near the federal courthouse late Thursday as smoke filled the air.

Portland has seen 50 days of protests, prompting a visit from the Department of Homeland Security’s Acting Secretary, Chad Wolf, earlier in the day on Thursday.

Wolf’s visit angered protesters and local officials, who said they didn’t ask for help from federal law enforcement and have asked them to leave.

Prior to his visit, Wolf issued a scathing statement in which he called protesters “violent anarchists” and a “violent mob” that have kept the liberal Northwest city under siege.

“Each night, lawless anarchists destroy and desecrate property, including the federal courthouse, and attack the brave law enforcement officers protecting it,” Wolf wrote.

“Instead of addressing violent criminals in their communities, local and state leaders are instead focusing on placing blame on law enforcement and requesting fewer officers in their community. This failed response has only emboldened the violent mob as it escalates violence day after day,” his statement said.