Texas and Arizona are bringing in refrigerated trucks to expand morgue capacity in several counties across each state, after the number of coronavirus fatalities shattered records this week.

Reuters reported that San Antonio and Bexar County each received five refrigerated trailers to store up to 180 bodies as some hospital morgues and funeral homes have reached capacity.

Two additional counties – Cameron and Hidalgo – also are sharing a refrigerated trailer to deal with the influx.

As the U.S. surpassed its single-day high, reporting 77,255 new cases of COVID-19, data showed nearly 20 percent of those cases were in Texas. 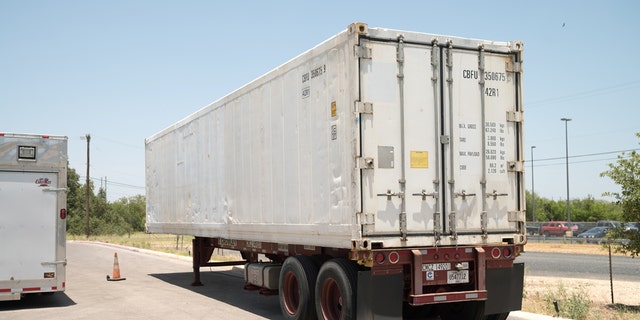 A refrigerated trailer that the San Antonio health authorities acquired to store bodies, as morgues at hospitals and funeral homes reach their capacity with the coronavirus disease (COVID-19) fatalities, is seen in Bexar County, Texas, July 15, 2020. City of San Antonio/Handout via REUTERS

Officials in Maricopa County described a “domino effect” as deaths surged and funeral homes experienced a backlog of bodies.

Executive Director of Public Health Marcy Flanagan explained that a medical examiner typically completes an autopsy on the bodies of coronavirus victims and then releases the deceased to a funeral home.

“If there’s nowhere to release them to, i.e. a funeral home, then that’s when we have to start storing bodies longer than we’re typically storing bodies at the medical examiner’s office,” Flanagan said Thursday at a press conference.

The Office of the Medical Examiner said it is currently at 63 percent morgue capacity but has brought in 14 cold storage containers– eight being held at the County facility and six more in reserve– that would allow an additional 294 decedents by the end of next week “if necessary,” Fields Moseley, a spokesperson for Maricopa County, told Fox News.

“We know some funeral homes are already at capacity in their morgues, so we want to be prepared in case we have to keep bodies for a longer period of time,” Moseley said. ” The County normally only stores bodies under OME’s jurisdiction.”

Atlanta man shot and killed while investigating power outage at his home: police