An LAPD ‘top shot’ who had become somewhat of a social media darling is facing a lawsuit after she fatally shot a man who appeared to advance towards her with a knife.

Toni McBride, 23, shot and killed Daniel Hernandez, 38 on April 22. A lawsuit was filed on behalf of Hernandez’s 14-year-old daughter, claiming that McBride had “reckless, violent and homicidal propensities,” the Daily Mail reported.

As a member of the Newton Division in South Central Los Angeles, McBride and her partner responded to a multiple-vehicle collision, with a suspect carrying a “folding utility-type knife” confronting her and ignoring commands to drop the weapon, the LAPD report stated. McBride shot four times and killed the suspect, later identified as Hernandez.

She then shot him twice more after he collapsed because he still had the weapon in his hand.

The Hernandez family claimed that the incident was unjustified, but the case did not gain attention until the death of George Floyd. Now, the Black Lives Matter movement has focused on McBride and Hernandez, the LA Times reported.

McBride first earned fame and attention after a slew of online videos showcased her speed and accuracy on the target range – skills that earned her the ‘Top Shot’ award in her academy class when she graduated as the youngest female officer to complete the course at the age of 18, and again at 20 when she completed full-time LAPD academy training.

“You can clearly see that Daniel Hernandez gets out of a totaled car, walks shirtless, with hands to his sides, he’s not making any gestures that’s threatening to anyone,” the family’s attorney, Narine Mkrtchyan, told NBC Los Angeles.

A police use-of-force expert believes the case is “a clear-cut justified shooting,” though. Ed Obayashi said he was convinced after watching video of the incident that there was “no doubt” that McBride faced “an immediate threat to her life.”

He claimed that McBride has “no choice” but to end the “threat” when Hernandez advanced, even after he was shot twice. 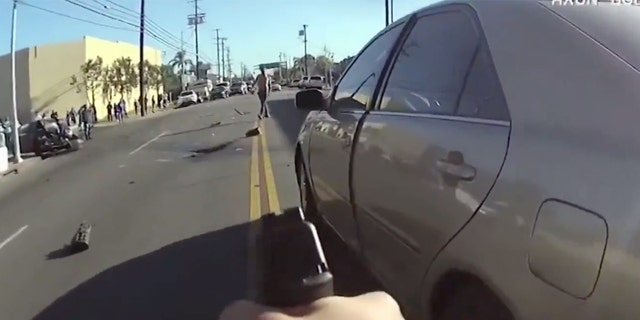 ‘She joined this department to help people who couldn’t protect themselves,” Larry hanna, McBride’s attorney, has said. “There were all these people around here, some frozen in their cars in fear, and this person was coming at them with a knife.”

Since the shooting, McBride has taken down Instagram posts that had attracted nearly 47,000 followers, the LA Times reported. She is back on patrol as the lawsuit progresses.

Florida sheriff investigates triple homicide on lake: 'This is a horrific scene”