A New York City police officer was injured Saturday while arresting vandals who were smearing paint on a “Black Lives Matter” street mural outside Trump Tower.

Two women were arrested after police said they dumped cans of black paint on the block-long mural on Manhattan’s Fifth Avenue.

It marked the third such act of vandalism targeting the street art since Mayor Bill de Blasio helped paint the mural in front of President Trump’s namesake tower on July 9.

Bystanders shot video of the chaotic scene showing police surrounding a Black woman as she used her hands to spread paint on the mural’s bright yellow letters. 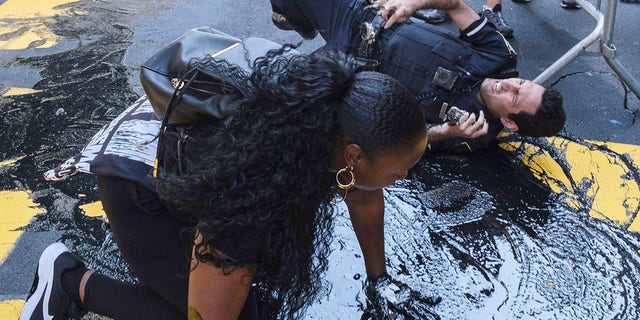 An NYPD officer slips and falls during an attempt to detain a protester pouring black paint on the Black Lives Matter mural outside of Trump Tower on Fifth Avenue in the Manhattan borough of New York on Saturday. (AP Photo/Yuki Iwamura)

One of the officers surrounding the woman slipped on the paint and fell to the ground, injuring his head and arm, police said. He was listed in stable condition at Bellevue Hospital.

“Thankfully our brother will be OK, but this nonsense needs to stop,” the Police Benevolent Association, the city’s largest police union, wrote on Twitter. “Our city is in crisis. Paint on the street helps no one.”

The women’s names and information on possible charges against them weren’t immediately available.

The incident happened less than 24 hours after three people were caught on video Friday dumping blue paint on the mural. They were arrested, charged with criminal mischief and released with an order to appear in court.

A 64-year-old woman was also arrested Friday after police said she was illegally posting fliers of 1-year-old shooting victim Davell Gardner Jr. The flier featured a picture of the infant with the message: “I wasn’t killed by a cop. I was killed by a Black person. Where’s BLM?”

Meanwhile, police are searching for a man who splattered red paint on the mural Monday.

The words Black Lives Matter have been painted on streets in New York and elsewhere in recent weeks to show support for the racial justice movement after the recent police killings of George Floyd and other Black men and women.