A Black man carrying an American flag stood outside Portland’s Federal Courthouse Saturday night, telling a crowd of protesters that “none of you guys represent Black lives” as they tore down a fence during the city’s sixth straight week of nightly unrest.

Jorge Ventura, a reporter with the Daily Caller, captured video of the unnamed man sitting outside the courthouse when demonstrators began to remove the fencing surrounding the already vandalized and spray-painted building.

The man, wearing a face mask and holding an American flag, can be heard telling protesters that he lives in Portland as they ask him to move so they can occupy the steps of the courthouse. He asks protesters “why” they are taking down the fence.

“It’s going on every day,” he continues. “If you don’t want to get gassed, stop! It has to stop!”

As members of the crowd shout obscenities, the man says: “None of you guys represent Black lives.”

Ventura recorded additional video of demonstrators taking down the fencing and stacking it against the courthouse. Others can be seen using fencing and hammers to strike and damage the walls of the building.

Portland Police said protesters used the fencing to barricade doors at the Justice Center and Federal Courthouse. Some in the crowd tried to persuade them to stop, but were shouted down, police said. 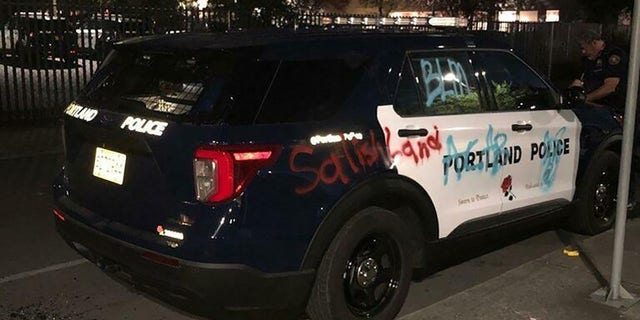 Protesters lit other small garbage cans and street fires, while a bonfire was lit at the base of the ruined Elk statue, police said. A police vehicle was also vandalized.

Police declared the incident a riot and began clearing the area after protesters broke into a Portland Police Association office building and started a fire inside.

“As the crowd was dispersed, several people in the crowd were arrested and officers were able to extinguish the fire,” police said in a statement Sunday. “Portland Police did not use any CS gas.”

Tear gas was deployed, according to pictures and video from the scene, but it was not necessarily CS gas.

Oregon’s largest city was in its second month of nightly unrest since the May 25 death of George Floyd in police custody in Minneapolis.

Businesses in downtown Portland have suffered $23 million in damage and lost business amid the chaos and violent protests, officials said earlier this month.

During this time, the violence in the city has included protesters throwing bottles, pieces of metal fence, rocks and paint-filled balloons at officers, injuring some, police have said. A federal officer was also attacked with a hammer.

However, some officials have criticized police for their response to the protests.

City Commissioner Jo Ann Hardesty over the weekend accused the Portland Police Bureau of collaborating with the federal Department of Homeland Security (DHS) in what she described as an “aggressive clampdown of peaceful protest.”

Attorney Billy Williams and others expressed concerns after videos on social media appeared to show unlabeled officers in unmarked vehicles suddenly grab rioters off the streets, without appearing to identify themselves or read suspects their Miranda rights.

On Friday, Oregon Attorney General Ellen Rosenblum sued DHS and the U.S. Marshals Service over the conduct of federal officers in the city.

Fox News’ Dom Callichio and The Associated Press contributed to this report.