The heat wave that’s bringing record temperatures to a large part of the country is fueling some powerful storms across the Upper Midwest, including one that produced a tornado in Wisconsin on Saturday.

The Storm Prediction Center (SPC) said there were dozens of reports of hail and wind damage from severe weather across the Upper Midwest into the Great Lakes on Saturday.

SUMMER HEAT WAVE SPREADS INTO NORTHEAST, OVER 115 MILLION UNDER ALERTS FROM STIFLING CONDITIONS

According to the SPC, one tornado touched down in Pierce County, Wis., about five miles north-northeast of Prescott. Large trees were reported to be downed on a highway 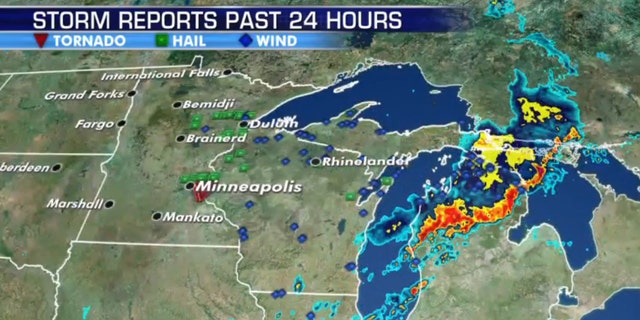 Storm reports across the Upper Midwest and Great Lakes after severe weather moved through the region on Saturday. (Fox News)

In neighboring Minnesota, a family’s home caught fire in Blaine after a lightning strike as the storms moved through the area. Fire officials told FOX9 the incident happened around 6:20 p.m.

The family was on the top floor of the building shortly before the lightning strike, but had moved down toward the basement after a tornado warning was issued, fire officials said. All were able to escape the building.

Minnesota residents were warned of severe weather conditions on Saturday, including storms and frequent lightning.

Storm reports said high winds caused the end of a historic train depot in the town of Petoskey to collapse.

“It was very scary,” Jennifer Shorter, the owner of Grandpa Shorter’s gift shop in Petoskey, told Mlive.com. “The tree (branches) were hitting the windows.”

One person in Presque Isle sustained two broken ribs after trees fell on his trailer at Onaway State Park, according to an SPC storm report.

The storms were fueled by a cold front interacting with stifling heat and humidity that stretches from the Central Plains to the Northeast.

The SPC said the risk of severe weather remains on Sunday for the eastern Great Lakes and into the Ohio valley.

“This is going to be a system that shifts to the east a bit today so you might see some more storms moving across Michigan into Ohio and Indiana,” Klotz said.

Large hail, damaging winds, flash flooding and tornadoes will all be possible on Sunday across the region.

The cold front is forecast to stall over the Mid-Atlantic and Ohio Valley late Monday into Tuesday, bringing the threat of showers and thunderstorms that could pack heavy downpours.