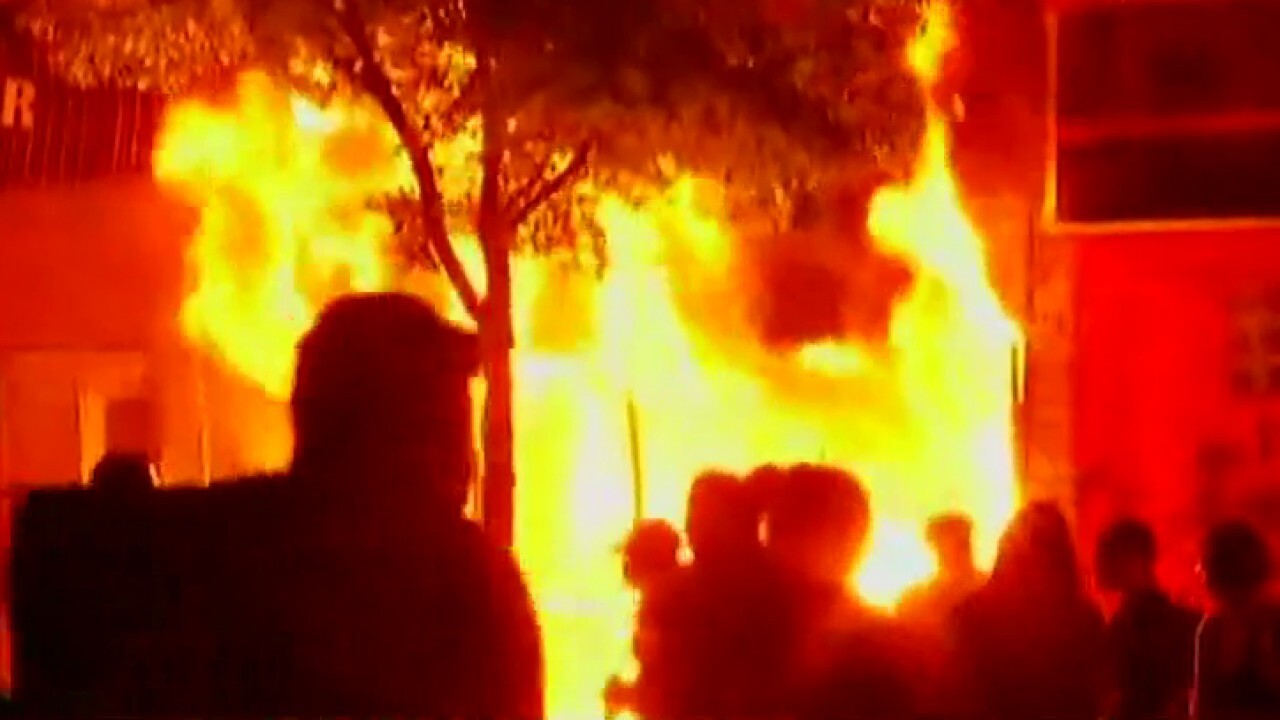 Minneapolis Police radio transmissions, obtained by the FOX 9 Investigators, provide the first minute-by-minute account of the decision making that led to the fall of the Third Police Precinct in Minneapolis.

Mayor Frey said the decision he made at 9:32 p.m. on Thursday, May 28, to evacuate the Third Precinct “was painful, but was not difficult in the end.”

“Death to one of our officers or the general public, that was not a consequence I could have on my watch,” said Mayor Frey.

The Third Precinct was surrounded by an estimated 2,000 protestors that night who gathered three days after the police killing of George Floyd.

Nearby buildings — a liquor store, an auto parts store, and a pawn shop — were fully engulfed in fire.

Inside the precinct was a skeleton crew of 15 to 20 officers.  A SWAT team was on the roof.  A strike team was trying to maintain a tight perimeter that had been constructed around the footprint of the building and its rear parking lot.

But the Third Precinct was not the only flashpoint in Minneapolis that night.

Chaos Across The City

By 8:43 p.m., Minneapolis Police had multiple hot spots they were monitoring downtown.

A large crowd, estimated at 1,500, was at Washington Avenue and 3rd Avenue, slowly moving east towards the freeway.

Another large group was at Hennepin and 5th Street, moving towards the First Police Precinct. A smaller group was on Nicollet Mall and 4th Street, the heart of the downtown shopping district.

There were about 400 state troopers downtown seeking instructions from dispatchers, but they were never deployed to the Third Precinct.

Mayor Frey believes the strategy was to spread the department thin.

“We were defending an entire city with 600 officers against thousands and thousands of protestors,” said Frey.

“It was not a matter of planning, it was a matter of math.  We simply didn’t have the numbers,” said Frey.

“We’ve got bottles, rocks, heavy concrete, and paint balls in the rear lot,” replies an officer outside.

By 9:15 p.m., officers defending the precinct knew they were losing the battle, and ask to use small explosive scatter rounds that disperse gas, munitions considered at the upper limit of less lethal force.

“We’re getting mortars and rocks at 175 yards and we can’t reach them (rioters). Can we escalate use of force to use scat rounds?”

But officers at the precinct that night told the FOX 9 Investigators no plan was ever communicated to them.

At 9:15 p.m. a supervisor gives permission to use tear gas.

“We would, but we don’t have any,” comes the reply.

At 9:32, Police Chief Medaria Arradondo called Mayor Frey to tell him police can no longer maintain order in the city.

Arradondo explained the bleak predicament at the Third Precinct, and Mayor Frey gave the order to evacuate.

“You had 15 to 20 officers inside, you had thousands of people outside the Third Precinct,” said Frey.

“The doors had been busted. You had people moving in.  Hand to hand combat was definite (possibility).  And the likelihood of very serious injury and death was high.  Death to one of our officers or the general public.  That was not a consequence I could have on my watch,” said Frey.

Now, the officers had to escape.

“We Are Sitting Ducks”

By 9:53, rioters were inside the precinct.  A supervisor goes from room to room in the sprawling building to make sure no one was left behind.  That morning, officers had cleared out their lockers and desks of weapons, body cameras, and any intelligence files.

In the parking lot behind the precinct, the SWAT and Strike teams are in their vehicles ready to depart, but more than a dozen officers are on foot.

“We’ve got to go, we are sitting ducks here at the back gate,” radios an officer.

But there’s a problem.  “I can’t get the gate open,” replies an officer.

One of the protestors had padlocked the back gait, the only exit, from the outside.

Video posted on YouTube shows squad cars crashing through the gate, as they try to provide cover for the officers escaping on foot.  The video shows rioters moving in, throwing bottles and debris at the fleeing officers.