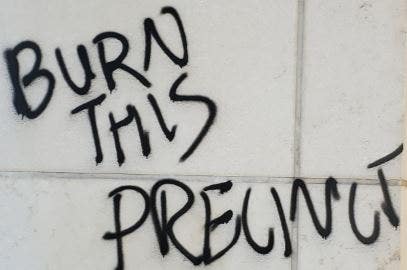 Seattle police said Sunday that a group of rioters who triggered property damage to government buildings and private businesses during a demonstration earlier in the day appeared to be “very organized.”

The second group marched down Fifth Avenue while breaking windows and tagging buildings with paint, police said. The group then headed south to Seattle Police Headquarters and Seattle Municipal Court where they again broke windows and spray-painted both buildings.

The rioters then marched northbound on Third Avenue, smashing the windows of businesses, looting, and tagging the walls along the way.

After the group made it to the West Precinct, some attempted to break into the building while others threw rocks and bottles at police officers. Other culprits threw mortar-type fireworks at officers, injuring them.

Police said two officers suffered lacerations and abrasion injuries. A third officer sustained burns to his neck and was transported to a nearby hospital. In all, 12 officers were hurt.

The crowd continued to Capitol Hill, committed more property damage and sparked at least one fire inside a business that crews eventually extinguished. Later, members of the group threw a mortar-type firework inside the lobby of the East Precinct after smashing its windows. The mortar triggered a small fire that was quickly extinguished, police said.

The rioters eventually broke up by the time they reached Cal Anderson Park. A police incident commander said people within the second group “appeared to be very organized” and their actions “appeared to be a very concerted effort at property damage of certain businesses and government facilities.”

Police denounced the rioting as “criminal acts, not peaceful protests.”

Arson and bomb investigators as well as agents from the Bureau of Alcohol, Tobacco, Firearms and Explosives [ATF] were conducting follow-up investigations on the arson and firework attacks.

Detectives with the Seattle Police Department were following up on the reports of property damage and looting.