A group of Portland women calling themselves the “Wall of Moms” is now showing up at demonstrations to act as a human barrier between protesters and law enforcement.

The women, wearing yellow shirts and bike helmets, were seen linking arms and chanting “Moms are here, feds stay clear!” during a protest in the Oregon city Sunday night, according to footage posted on social media.

Portland has experienced weeks of unrest following the May 25 death of George Floyd and the city’s mayor recently called on President Trump to remove federal agents sent there to disperse crowds and protect federal property.

“We are about protecting peaceful citizens’ right to protest,” Bev Barnum, a 35-year-old mother of two identified by BuzzFeed News as the organizer of the “Wall of Moms” told the website. 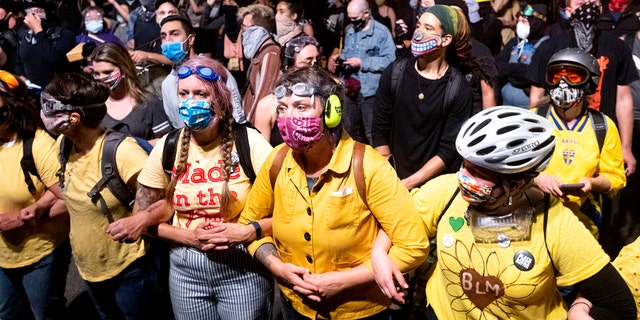 A group calling themselves the “Wall of Moms” gather outside the Mark O. Hatfield United States Courthouse Sunday in Portland, Oregon. (AP)

In a Facebook event for the group’s first gathering Saturday, Barnum wrote “as of late, protesters are being stripped of their rights by being placed in unmarked cars by unidentifiable law enforcement.

“We moms are often underestimated. But we’re stronger than we’re given credit for,” she added. “So what do you say, will you stand with me? Will you help me create a wall of moms?”

Brenna Burnett, a 29-year-old participant, told BuzzFeed News that the barrier the women are forming is “about Black moms every day losing their children, husbands, brothers, friends.”

“This is about Black Lives Matter,” she added. “This is not about White women coming in to save the day,” she said.

The “Wall of Moms” first started appearing at the protests Saturday. (Reuters)

Portland Police issued a statement early Monday saying federal law enforcement dispersed an unruly crowd that had gathered outside of a U.S. federal courthouse in the city late Sunday night.

The statement said demonstrators first started tampering with a fence set up around the property before pulling it down.

“Dozens of people with shields, helmets, gas masks, umbrellas, bats, and hockey sticks approached the doors of the courthouse,” Portland Police said before federal officers came outside and dispersed the protesters.

Then early Monday morning, the protesters returned and “lit a fire within the portico in front of the federal courthouse,” police said.

“Others gathered around the fire adding wood and other debris to make it larger,” authorities said before the federal officers came out a second time, extinguished the blaze and cleared the crowd away from the area.

Ghislaine Maxwell fears for her life, believes she might meet the same fate as Jeffrey Epstein: report