An area of disturbed weather over the Bahamas may bring a soaking rain to parts of South Florida on Monday and is being monitored in case it develops into something more substantial.

The National Hurricane Center (NHC) in Miami said Monday morning that an area of disorganized showers and thunderstorms over the central Bahamas, central Cuba, and adjacent Atlantic waters are associated with what is known as a “tropical wave.”

The disturbance is forecast to move through the Straits of Florida throughout the day and over the southeastern Gulf of Mexico by Tuesday.

As the system passes by on Monday, showers and thunderstorms are possible across South Florida and the Florida Keys.

The system is then expected to move across the Gulf, reaching the Texas and Louisiana areas by Thursday. 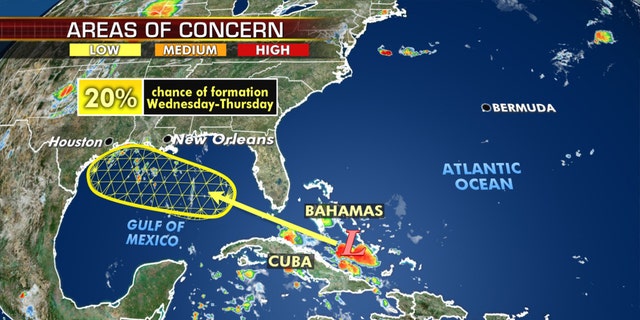 A tropical wave near the Bahamas is being monitored as it could potentially develop into the next named tropical system. (Fox News)

“Environmental conditions could become a little more conducive for development of this system over the Gulf of Mexico,” the NHC said Monday.

The system could potentially develop into a named storm as it moves in the Gulf of Mexico this week, but the NHC said as of Monday there’s only a 20 percent chance over the next five days.

Even if the system does not develop into a named storm, tropical moisture can be expected to arrive in southern Louisiana and eastern Texas by the end of the week.

Water in the Gulf of Mexico warms faster than the Atlantic, making it a breeding ground for tropical activity.

Where tropical development tends to happen in the Atlantic basin for the month of July. (Fox News)

Shallow water just north of the Bahamas and an area just east of the Lesser Antilles are other early-season hot spots for tropical development in the month of July.

So far, the month of July has had two named tropical storms.

The names of the 2020 Atlantic hurricane season. (Fox News)

The worst of the season still likely lies ahead, with September historically being the most active month. The majority of big storms happen from August to October.

While six named storms have developed so far, forecasts call for 13 to 19 named storms during the 2020 Atlantic hurricane season, which runs from June 1 to Nov. 30.

This forecast is well above the average of 12 named tropical storms, six hurricanes and three major hurricanes during the season.

A look at the forecast for the Atlantic hurricane season and what’s happened so far as of mid-July, 2020. (Fox News)