Mandatory evacuations have been ordered for a community in Northern California as a wildfire has grown to several thousand acres, one of several fires burning across the state.

The Lassen County Sheriff’s Office said Sunday night the growth of the Hog Fire has spurred a mandatory evacuation order for the Lake Forest Estates, Phildow, and Grey Eagle Lane areas on the outskirts of Susanville, a community located about 110 miles east of Redding.

“This event has transitioned to a mandatory evacuation order — people need to leave the evacuation area,” the sheriff’s office said. “Please be courteous to your neighbors and use caution due to first responders in the area.”

According to CAL Fire, the Hog Fire has grown to 5,200 acres and is zero percent contained.

Officials said an evacuation center has been established at Lassen Community College. The Hog Fire started at 3:30 p.m. on Saturday and is burning a half-mile north of Goumaz Campground and south of Highway 44.

The cause of the blaze remains under investigation, according to CAL Fire.

Evacuations remain for another fire in California that’s close to the Oregon border. 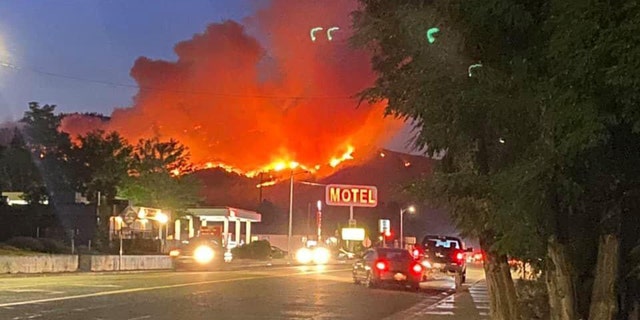 Evacuations have been ordered in a Northern California community due to the Badger Fire. (CAL FIRE SKU)

CAL Fire said Monday morning that due to steep terrain and limited access, crews are having a “difficult time” gaining full containment of the Badger Fire.

The blaze has burned 450 acres outside Yreka in Siskiyou County. Evacuation orders remain in effect for the community of Hawkinsville.

The blaze started Friday and is only 15 percent contained.

Evacuations have been ordered in a Northern California community due to the Badger Fire. (CAL FIRE SKU)

The wildfires are among several burning in the state.

The Mineral Fire in western Fresno County expanded to more than 39 square miles and was 35 percent contained.

Four structures have been destroyed and 60 remained threatened. No injuries were reported. The fire erupted nearly a week ago west of Coalinga.

To the south in Los Angeles, crews protected homes from a brush fire that burned near properties in the Van Nuys neighborhood.

Low humidity and hot temperatures have raised fire danger in large portions of the state.