Stifling summer heat will linger on Tuesday for parts of the East Coast as eyes turn to the Gulf of Mexico for potential tropical developments.

While a few degrees lower than Monday, afternoon high temperatures across the mid-Atlantic and Northeast will once again be above-average on Tuesday and the rest of the week.

High heat and humidity will make it feel well over 100 degrees, especially in areas from the Chesapeake Bay south into the Carolinas.

Heat advisories are still up for parts of the Carolinas up into the mid-Atlantic. 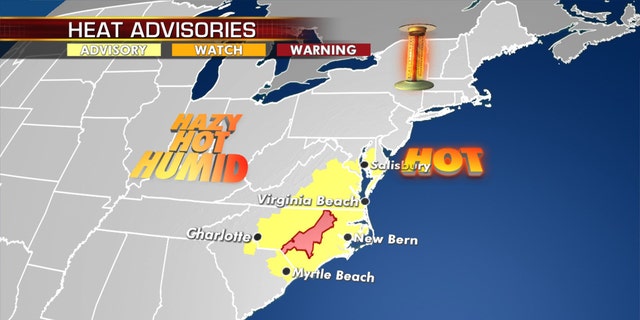 Heat advisories and excessive heat warnings on Tuesday across the Carolinas into the mid-Atlantic. (Fox News)

A cold front is giving the Northeast a break; northern New England will dip back into the 70s.

It isn’t just hot in the East.

Across the West, above-average temperatures will make things uncomfortable in Washington, Oregon and the Intermountain West. High temperatures in the mid- to upper-90s will shift east by Wednesday into the Rockies.

Wildfire danger across the Great Basin on July 21. (Fox News)

All that heat and low humidity are creating another day of fire danger Tuesday for parts of the Great Basin.

Eyes on the Tropics

A tropical wave bringing scattered showers and thunderstorms to South Florida and the Keys Tuesday is being monitored by the National Hurricane Center (NHC).

A tropical wave bringing storms to South Florida will move into the Gulf of Mexico and toward Texas and Louisiana by later this week. (Fox News)

This disturbance will move into the Gulf Coast, bringing wet weather and scattered storms — especially for the central and western Gulf areas in the second half of the week.

The NHC said as of Tuesday morning there’s now a 40 percent chance the area develops into the next named tropical system.

An Air Force Reserve Hurricane Hunter aircraft is scheduled to investigate the system Tuesday afternoon, according to the NHC.

Elsewhere in the Atlantic basin, an area of showers and thunderstorms has increased and become better organized midway between the west coast of Africa and the Lesser Antilles.

There’s a 60 percent chance the system develops into something further in the next five days as it moves west, forecasters said.

Storms have been firing up along a cold front across the nation’s midsection. (Fox News)

Severe weather and the risk for flash flooding will be possible in a few areas Tuesday due to a cold front bringing relief from the heat to the Northeast.

Storms may impact an area stretching from the Plains into the mid-Atlantic and Ohio Valley, where a frontal boundary remains the focus for the storms.

There will be a threat of severe weather and flash flooding over the northern mid-Atlantic and Ohio Valley on Wednesday, according to the Weather Prediction Center (WPC).