Trustees of California State University are at odds with the state legislature on potentially expanding the school system’s requirements on making ethnic studies a graduation requirement.

After six years of developing a plan with a broad array of classes covering ethnic issues and academic studies, the trustees will vote Wednesday to make the first changes to the school’s general education curriculum that they’ve seen in 40 years.

The proposal, however, is much broader than a similar initiative by the California Legislature, which would require California State University campuses starting in the 2021-2022 academic year to offer courses on race and ethnicity focusing on Native Americans, African Americans, Asian Americans and Latina and Latino Americans. Students would need to take a three-credit course to graduate. 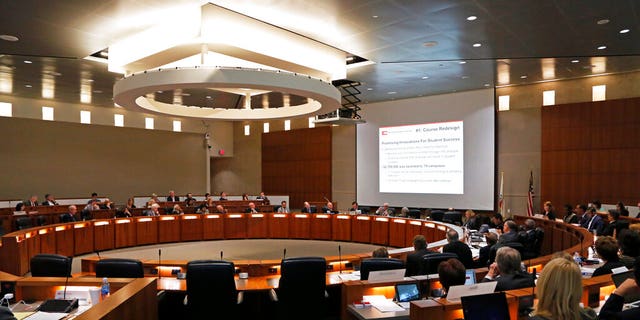 The university system’s proposal would take effect in the 2022-2023 academic year and offers a greater selection of topics than the legislature’s bill, which critics said does not include some courses such as Jewish studies. Trustees said their proposal also spells out that students can take courses on social justice that explore issues such as the criminal justice system and public health disparities.

The university’s plan would cost $3 to $4 million while the bill is estimated to need $16 million for implementation.

The trustees argue that having the government decide on academic requirements is too broad an oversight.

However, the legislature’s bill was written by a former professor and Democratic Assemblywoman from San Diego, Shirley Weber, who said the state government intervened with their own bill after years of delay in curriculum changes from the university.

In this June 10, 2020 file photo Assemblywoman Shirley Weber, D-San Diego, talks at the Capitol in Sacramento, Calif. Trustees of California State University. Weber, authored the legislature’s bill, which could go to Gov. Gavin Newsom’s desk as early as next week for his signature, her office said. (AP Photo/Rich Pedroncelli, File)

Weber said the school’s recommendation “does not respond to the challenges we currently face, has been rejected by the faculty, and is not supported by students.”

She also said that the California Faculty Association supports her bill. The association, which represents 29,000 faculty members at California State University, has said the university’s proposal is overly broad, allowing classes on social justice when the aim should be teaching students about the experiences of minorities and people of color in the U.S.