Colorado Gov. Jared Polis has ordered a statewide last call for all liquor-licensed establishments at 10 p.m. for a month beginning Thursday — but he also said he wanted to give local authorities greater control over their own nightlife once the coronavirus threat has passed.

“The state of inebriation in a public place is inconsistent with social distancing,” the governor said during his coronavirus news conference Tuesday.

That’s because drinking is known to reduce inhibitions and, according to Polis, results in people flouting social distancing guidelines.

“Towns value nightlife,” he said. “They should not be encumbered by the state.”

But as the coronavirus continues to spread across the country, Polis is again cracking down on bars — part of an industry that has seen devastating effects on its financial well-being during the pandemic — to try and slow it down.

“This is not the summer to party,” he said. “It’s the summer of no parties.”

But once there’s a vaccine or cure, he added, there “will be a big party.”

Polis argued that people out drinking tend to ignore or bend the rules about social distancing, giving the virus more chances to spread. And he singled out people in their 20s. in particular. for such behavior.

“We know we can’t behave the way we did last summer or even the way we did in February,” he said. “Though we have taken steps to open up more of our economy, we have to remain vigilant.” 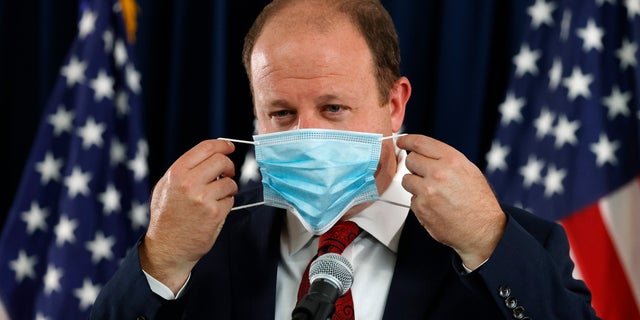 Colorado Governor Jared Polis puts on his face mask after concluding a news conference on the state’s efforts against the new coronavirus Tuesday, July 21, 2020, in Denver. (AP Photo/David Zalubowski)

People aged 20 to 29 account for most of the spread in Colorado, according to the state’s coronavirus data.

Rather than go to bars, Polis urged people to just “have four of your besties over” to avoid super-spreader events.

During the Tuesday news conference, Polis also called on state lawmakers to eliminate the statewide last call rule – describing it as “a very bad law.” Local control would allow individual communities to tailor their nightlife to suit their own needs, he said.

But Colorado’s state Senate Majority Leader Steve Fenberg, a Democrat like Polis, told the Denver Post that changing the statewide last call would be a low priority for lawmakers.

“Personally, I think the current law is working fine,” he said. “I don’t think there are hordes of constituents begging to stay at a bar past 2 a.m.”