Police in Dallas have released images of a suspect wanted for stealing supplies intended for a coronavirus testing site, delaying its opening.

The unidentified man, who has a large star tattoo on his neck, is accused of raiding the Salvation Army’s Pleasant Grove Corps Community Center around July 13.

“Overnight, individuals broke into the storage location for the site and stole all of the equipment and supplies used to conduct testing,” the Parkland Health and Hospital System said in a press release earlier this month, according to The Dallas Morning News. 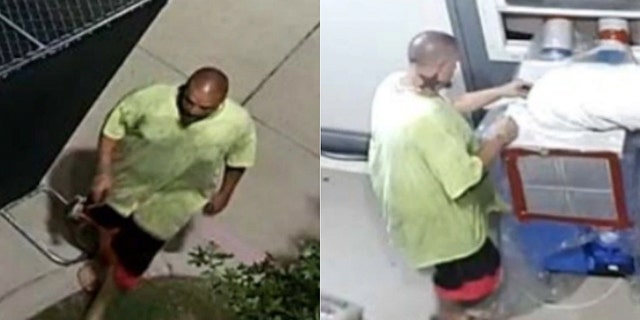 The suspect is accused of stealing items like air conditioners, hand sanitizer and a thermometer from the storage location of a Dallas coronavirus testing site. (Dallas County Hospital District Police Department)

A spokesperson for the hospital network told the newspaper that thousands of dollars in items were stolen, ranging from an encrypted laptop to personal protective equipment for health workers.

Following the burglary, the testing site opened one day later than planned.