A growing wildfire that’s burning in the northeast corner of California has scorched thousands of acres and even created its own weather.

Cal Fire said the Hog Fire burning in Lassen County west of Susanville had burned at least 9,420 acres as of Wednesday and is only 9 percent contained.

The blaze began Saturday afternoon and has quickly grown, threatening 170 structures. The cause remains under investigation.

On Monday the fire exploded to more than 6,000 acres and created its own weather, generating lightning, thunder, rain and fire whirls out of a huge ash plume towering above. 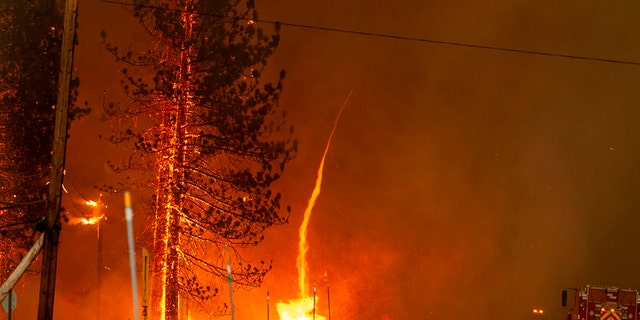 A fire whirl shoots into the sky as flames from the Hog fire jump highway 36 about 5 miles from Susanville, California on July 20. (Photo by JOSH EDELSON/AFP via Getty Images)

Photographer Josh Edelson captured what is known as a “firewhirl” or “firenado” shooting into the sky as the blaze jumped Highway 36 about five miles outside of Susanville on Monday.

Fire tornados, also known as fire vortices, are not tornadoes in the true sense. They occur when a gust of extremely hot air blows through the fire at a certain angle, producing a spinning momentum which then sucks up embers and debris.

In 2018, the massive Carr Fire in California produced a vortex with winds clocked at 143 mph by the National Weather Service (NWS), a wind speed equivalent to an EF-3 tornado on the Fujita scale.

According to the NWS, a pyrocumulus cloud forms if there is enough moisture and atmospheric instability over the “intense heat source.”

“Although not common, these clouds can grow large enough to produce lightning and possibly some light precipitation,” the NWS notes.

The explosive storms can form during a fire when heat and moisture from the plants are released, even when the fuel is relatively dry. Similar conditions were seen during devastating wildfires earlier this year in Australia.

Edelson, who has photographed more than 30 fires in the last decade, told SF Gate the fire “blew up” before the thunderstorms started.

“The fire rained down on itself, so it was actually raining as the fire was raging through the forest,” he told SG Gate. “It felt like I was on another planet. It was the weirdest thing as far as fires go. I’ve seen fires generate thunderstorms, but never rain.”

Cal Fire said the blaze also damaged an essential fiber optic cable that impacted communications in Susanville and the incident command post for the fire. Technicians are working to restore internet and cellular service to the community.

More than 1,340 personnel have responded to the blaze.

The Lassen County Sheriff’s Office issued a mandatory evacuation order for the Lake Forest Community, and along Highway 36 from County Road A1 to Willard Creed Road.

Smoke from the fire is causing hazy skies across much of Northern California, in addition to air quality advisories for sensitive groups.