Chicago Mayor Lori Lightfoot joined police officials Wednesday to plead for assistance from the public a day after gunfire erupted outside a funeral home that left 15 people injured, and a separate incident in which a 3-year-old girl was shot in the head — this after rejecting the Trump administration’s plan to send federal agents to help combat increasing crime in the city.

A visibly frustrated Lightfoot condemned both incidents as the city grapples with a surge in gun violence that has seen dozens of shootings on an almost daily basis.

“This is a mourning morning,” she told reporters at a news briefing. “Another day that we start with despair. Another day we start with reporting on violence that has struck a neighborhood.”

“We cannot give the killers, the shooters, any shelter. … Someone listening at this moment knows who is responsible for these and other crimes. … I implore you not to be silent in this moment,” she continued. “… I recognize there is fear. But if we are silent, the violence will continue. … This is our time to step up. We are the majority. We are the people who will change this narrative, but only if the silence is broken.”

Tuesday night’s shooting on the city’s South Side occurred as a group of people was standing outside a funeral home in the Gresham neighborhood. A stolen Chevy Malibu traveling on the 1000 block of 79th Street was passing by when passengers inside opened fire, Chicago Police Chief of Detectives Brendan Deenihan said.

The group returned fired and the vehicle sped off before crashing a short distance later. The occupants inside fled. At least 60 shell casings were found at the crime scene and one person was taken into custody for questioning, police said.

Video surveillance of the incident is not “graphic” enough to help investigators identify the three people believed to have been inside the Malibu, Deenihan said.

“People know they were going to do this. It wasn’t just random. … We believe that there’s [sic] individuals out in the community and out in the crowd who know the shooters,” he said. “They know who did this incident. We are imploring, really seeking [help]. Please help the detectives with this investigation.”

Tuesday’s victims included 10 women who range in age from 21 and 65, police said. All are expected to survive.

The funeral was being held for Donnie Weathersby, 31, who was the victim of a fatal drive-by shooting last week, the Chicago Sun-Times reported. Police officials said the shooting was gang-related. 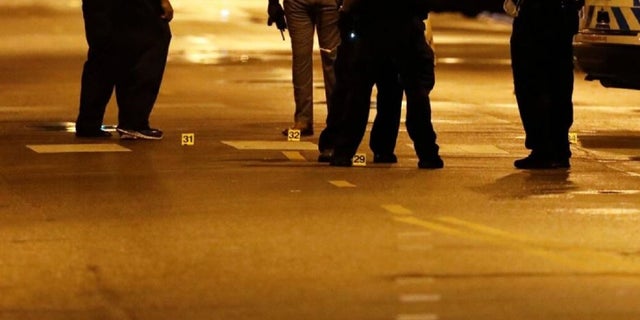 Evidence markers are seen on the ground as Chicago Police officers investigate the scene of a shooting in Chicago, Illinois, on July 21, 2020.(KAMIL KRZACZYNSKI/AFP via Getty Images)

Two police squad cars were stationed outside the funeral home, Police Superintendent David Brown said, something the department does for funerals for known gang members.

The shooting was part of the city’s expanding gang conflict that has resulted in a sharp uptick in violence in recent years. The city is home to 117,000 gang members across 55 major gangs and hundreds of factions and subsets, Brown said.

“And any day of the week, any hour of the day, several hundred gang conflicts [are] related to the 117,000 gang members,” Brown said.

Officials also pleaded for help in finding the shooter who injured a 3-year-old girl hours after the funeral shooting. The child’s parents got into an altercation at a gas station and were shot at while in their car.

The girl was struck in the head but is expected to survive, Deenihan said.

Both shootings come as the Department of Homeland Security (DHS) is planning to deploy federal agents to Chicago to combat the increasing crime. Lightfoot has voiced her opposition to the plan, tweeting Tuesday that under “no circumstances will I allow Donald Trump’s troops to come to Chicago and terrorize our residents.”

Much of the opposition has been in response to the actions of agents in Portland, where nightly protests have taken place since the death of George Floyd on May 25. President Trump has repeatedly blamed Democratic leadership in cities experiencing increases in crime and civil unrest.

On Wednesday, he announced a “surge” of federal forces from several agencies — including the Drug Enforcement Administration (DEA), Homeland Security, FBI and the U.S. Marshals Service — to be deployed to Chicago.

“Frankly, we have no choice,” he said at the White House. “Perhaps no citizens have suffered more from the menace of violent crime than the wonderful people of Chicago,”

The move is part of “Operation Legeand,” which began in Kansas City, Mo., earlier this year.