The New York Police Department has begun the process of clearing out remaining protesters from an encampment in downtown Manhattan’s City Hall Park, where the group has been camping out in tents for the past several weeks, according to police and social media.

The NYPD moved in shortly before 4 a.m. in the area of Centre and Chambers streets, and began the process of pushing protesters out, police said. The group has camped out in City Hall Park since at least the middle of June, demanding police defunding following weeks of protests over the death of George Floyd and other Black Americans who died while in police custody or in officer-related shootings.

Organizers called it “Occupy City Hall” — a nod to the 2011 Occupy Wall Street movement a few blocks away in Zuccotti Park.

During his press conference on Wednesday morning, New York City Mayor Bill de Blasio said he and NYPD Commissioner Dermot Shea had made the decision together around 10 p.m. Tuesday to dismantle the encampment.

“What we saw change over the last few weeks was the gathering there got smaller and smaller, was less and less about protests, more and more became an area where homeless folks were gathering,” de Blasio said. 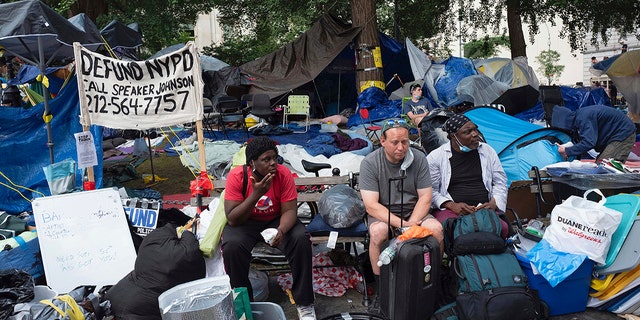 Shea said there were 40 to 50 people still located within the park when police moved in on Wednesday morning.

The NYPD went in with attorneys and video cameras, and gave the occupants warning, Shea said. He also said officers gave people the opportunity to take their property.

“A number of individuals did not want to leave,” Shea added.

No one was injured, Shea said, but one person threw a brick at an officer, who was blocked by a shield.

In total, seven people were taken into custody, including the person accused of throwing a brick. The six others will likely be released with summonses, Shea said.

In closing, Shea called it “one for the win column and another step toward getting back to normalcy.”

Fox News’ Courtney Crawford and The Associated Press contributed to this report.

Chicago shooting wounds at least 9 on South Side, police say