The suspected killer charged in the death of three fishing buddies in Florida deserves nothing short of the death penalty, the mother of one of the victims said Thursday.

Authorities believe Wiggins killed the group of friends, who planned to go night fishing in Lake Streety near Frostproof, 75 miles east of Tampa, The Ledger reported.

Before heading to the lake, Tillman stopped at a Dollar General store in Frostproof, where Wiggins and his brother William, 21, were seen standing behind him in line. The pair overheard him telling the clerk he would be meeting up with Springfield, authorities said.

TRUMP TO ‘SURGE’ FEDERAL AGENTS TO CHICAGO, OTHER CITIES, AMID SPIKE IN VIOLENT CRIME 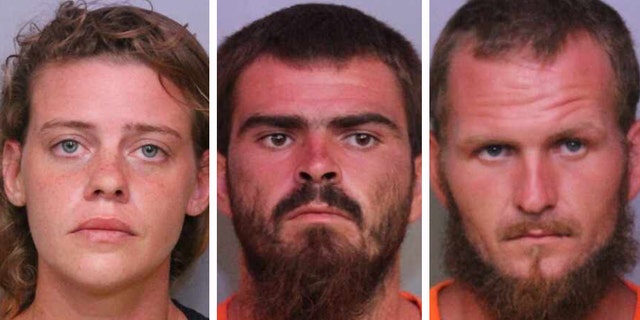 Mary Whittemore, 27, William Wiggins, 21, and his 26-year-old brother Tony Wiggins have been arrested in connection with the triple murder of a group of friends who were slated to go fishing on a Florida lake earlier this month. (Polk County Sheriff’s Office)

Tony Wiggins confronted Springfield, a mechanic, and accused him of stealing his truck and selling the engine. He then opened fire on the three men, Polk County prosecutors said. Investigators have not confirmed if the accusation is true.

In a Wednesday news conference to announce the arrests, Polk County Sheriff Grady Judd said Tony Wiggins was “pure evil in the flesh.”

“I didn’t stutter. He has 230 charges in his arrest history. Fifteen convictions and two times to state prison at only 26,” Judd said. “He’s a thug, he’s a criminal. He’s pure evil in the flesh. He’s wild and he’s out of control.”

“Our goal, and we pray our state attorney can seek the death penalty,” he added, according to WTVT-TV. “He needs to seek a fair trial…and then be executed. Legally, we can’t execute him the way he did those three guys trying to fish on a Friday night.”

Tony Wiggins is being held with no bond, while a judge set bond for his brother and Whittemore at $46,000 and $45,000, respectively.