More severe thunderstorms are possible across the Northeast and New England Thursday – a day after wild lightning in the New York City area set a church on fire.

Strong to severe storms will develop again Thursday afternoon and evening, especially along the Interstate 95 corridor from New York to Boston.

Damaging winds will be the main threat, with a chance of heavy rain and flash flooding. Isolated tornadoes also are possible, along with some hail. 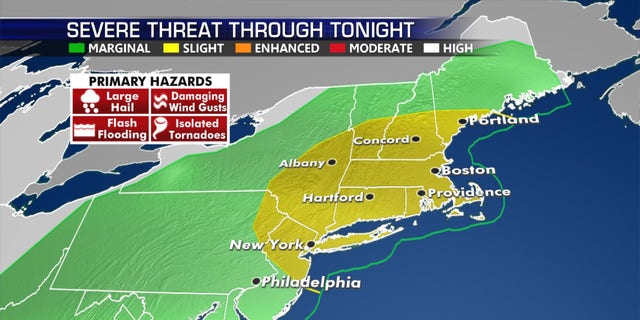 The area at risk of severe weather on July 23. (Fox News)

A bolt of lightning hits One World Trade Center in lower Manhattan during a thunderstorm in New York City on July 22, as seen from Jersey City, NJ. (Photo by Gary Hershorn/Getty Images)

An area over the northern Plains also is at risk of seeing intense thunderstorms, where isolated large hail could fall.

On Wednesday, there were more than 150 reports of wind damage, mostly concentrated from the mid-Atlantic to the Northeast.

Severe thunderstorms brought impressive lightning to the New York City area, some seen behind the Statue of Liberty.

In the city’s Queens borough, a fire tore through the Spirit & Truth Christian Church after a reported lightning strike

A church in Queens caught fire during a severe lightning storm that hit New York City on Wednesday. (cynxxcity via Storyful)

Pastor Daniel Marimuthu told WABC-TV he was very disappointed because his congregation returned to physical services only two weeks ago after spending months apart due to coronavirus.

WHAT IS A SQUALL LINE? WHAT TO KNOW ABOUT THIS THREATENING WEATHER

“We just have to say, ‘thank you, God’ nobody was in there when this happened, I guess this can be repaired,” he said.

Elsewhere across the region, flashes of lightning and gusty winds were reported.

Driving rain also triggered flash flooding on some streets in the area.

Hot, sticky temperatures will be ongoing Thursday for much of the North Central U.S. High temperatures in the mid- to upper-90s could help trigger storms in the northern regions.

The Great Basin should be on alert again Thursday for high fire danger.

The monsoon season also has begun in the Southwest.

Heavy rain also could cause pockets of flash flooding in parts of Arizona and New Mexico.

The remainder of the week may feature excessive rainfall over the Four Corners region.