Portland authorities are calling on the government to remove fencing around a federal courthouse amid ongoing protests or face legal action, according to a recently published official letter.

The “illegally” installed concrete and metal barriers “are both unpermitted and represent a hazard to the traveling public,” said a letter sent with a cease-and-desist order to a federal official Thursday. Among other things, they block a bike lane, according to the document, published online by Willamette Week. 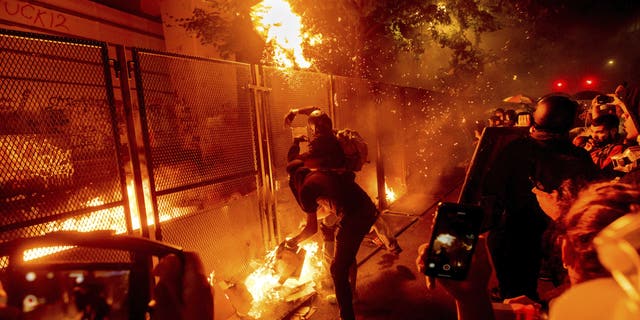 “Unidentified agents of the federal government have placed unpermitted fencing and jersey barriers in the city’s right-of-way outside of the Hatfield Federal Courthouse,” the letter states. “The fencing and barriers in the right-of-way create a hazard for Portlanders by blocking the bike lane on SW Main, which is the premiere bike facility into downtown Portland.”

MORE THAN 2,000 PORTLAND DEMONSTRATORS TAKE TO STREET FOR 57TH NIGHT IN A ROW, CLASH WITH FEDS

Failure to remove the fencing would violate city code and administrative rules, “and will be subject to fines and potential legal action,” said the letter.

A spokesperson for the U.S. General Services Administration, which received the letter from Portland’s transportation head and its chief deputy city attorney, did not immediately respond to Fox News’ request seeking comment.

The fencing was erected Wednesday to protect the courthouse in downtown Portland, according to Willamette Week. But it has since become a focus of protesters’ attention after nearly two months of demonstrations, which at times have devolved into riots.

Since its installment, demonstrators have attempted to tear it down, throwing fireworks over the perimeter. In at least one instance, they lit a large fire between the barrier and the courthouse, according to social media and reports.

More than 2,000 people took to the streets Thursday night into Friday morning.

The protests began in May after the killing of George Floyd in Minneapolis while he was in police custody, and reportedly flared after President Trump sent federal agents despite the city’s opposition.

Trump defended the government’s decision to take action in Portland on Thursday night during an interview with Fox News’ Sean Hannity, saying, “We had to do it.”

According to Oregon Public Broadcasting, the fencing cost taxpayers more than $208,000.

UN urges US to tamp down use of force by officers in Portland, warns of ‘human rights violations’