A federal government plane landed in Seattle on Thursday, carrying federal agents who will reportedly be on standby ahead of planned weekend protests in the city, authorities said.

King County Executive Dow Constantine said the plane landed at Boeing Field and more than a “dozen personnel drove off to an unknown destination.”

City leaders confirmed that federal officers might be deployed to “protect federal buildings” after they received conflicting reports from the Department of Homeland Security (DHS).

Seattle Mayor Jenny Durkan said Acting DHS Secretary Chad Wolf told her Thursday afternoon that the DHS had no plans – and saw no need – to send federal law enforcement to Seattle. That belief apparently changed later in the day. 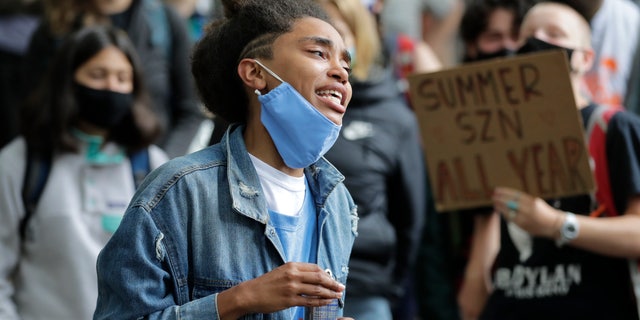 A person speaks during a rally near the King County Courthouse, Wednesday, July 22, 2020, in Seattle. (Associated Press)

“I made clear to Acting Secretary Wolf that deployments in Seattle — like we have seen in Portland — would undermine public safety and break community trust,” Durkan added. “DHS now says they have a limited number of agents in the area on standby to protect federal buildings.”

Washington state Gov. Jay Inslee said he also received conflicting messages from the federal government, adding that his staff was “repeatedly” told there was no surge of additional personnel to Seattle.

“Now we are hearing a different story where they have a limited number of agents who are in the area on standby, if needed,” Inslee tweeted. “I am concerned that anything could aggravate the situation.”

Durkan said that if federal forces intervene in the city, she will seek to limit their actions.

“A federal judge in Portland has entered an order limiting the actions of federal forces there,” she wrote. “We are prepared to seek the same relief if necessary.”

“If they send tactical units here and those units maintain a low profile that’s one thing,” he continued. “But once they become visible, they are going to provoke the more violent segments of the protesters who will see it as an incursion.”