Chicago aldermen are divided over the removal of two Christopher Columbus statues, with some praising the move while others felt “blindsided,” according to reports.

Mayor Lori Lightfoot removed statues from Grant Park and Little Italy, briefly consulting Italian-American leaders on Thursday night before removing the statues early Friday morning, according to ABC 7 Chicago. The mayor cited safety concerns for the removal, and promised a formal process to evaluate monuments and memorials across the city.

“As previously stated, the statues were relocated in response to demonstrations that became unsafe for both protesters and police, as well as efforts by individuals to independently pull the Grant Park statue down in an extremely dangerous manner,” a statement from the mayor’s office read.

The move is a sharp turn from the mayor’s previous policy, which opposed taking down the statues on the grounds that it would be “erasing history,” the Chicago Tribune reported. 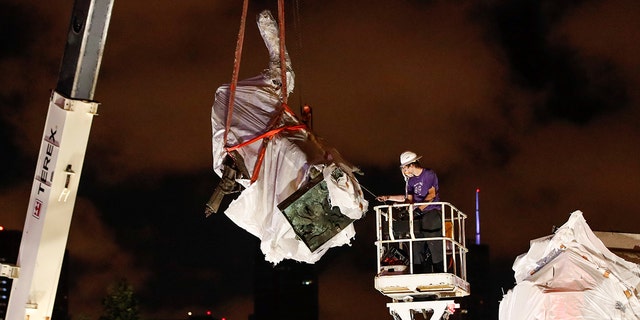 Some leaders, including Alderman Nicholas Sposato of the 38th Ward approved of the decision, saying that it was “best for the safety of the city,” though he stressed that he understood it to be a temporary removal.

CHICAGO PASTOR LEADS PRAYER WALKS TO ‘PUSH BACK AGAINST THE VIOLENCE’

Alderman Anthony Napolitano of the 41st Ward more openly discussed his disappointment, saying that he was saddened by the removal and questioned the decision to remove the statues overnight, according to the Sun-Times.

“It’s because a bunch of people, a bunch of socialist cancel culture people cried about it that we removed it in the middle of the night,” Napolitano said. “In America, we do this by discussion.”

Five of the city’s progressive aldermen called for the mayor to make the removal permanent, labeling them “monuments to white supremacy.”

“We thank the activists and organizers who put their bodies on the line to make this happen, and we commit to continue to work towards replacing Columbus Day with Indigenous Peoples’ Day, and dismantling white supremacy in all its forms,” Aldermen Rossana Rodriguez (33rd), Carlos Ramirez-Rosa (35th), Daniel La Spata (1st), Jeanette Taylor (20th), and Byron Sigcho-Lopez (25th) said in a statement.