Portland rioters use 'cover of crowd' to commit crimes, launch fireworks at officers

Portland police declared a riot early Sunday after protesters — who have gathered for 59 straight days since the death of George Floyd — breached a reinforced fence around the downtown federal courthouse.

One person suffered “numerous gunshot wounds” in an unrelated shooting that broke out on Martin Luther King Jr. Blvd. around 1:50 a.m. – the same time police were dealing with the riot, which “seriously hampered patrol operations,” according to the Portland Police Bureau.

The victim was hospitalized with non-life-threatening injuries.

The demonstrations on Saturday evening drew thousands and was peaceful, according to most accounts, with many protesters there to oppose the presence of federal agents in battle gear.

Acting Depatment of Homeland Security Deputy Secretary Ken Cuccinelli retweeted a video that purportedly showed members of the militant anti-fascist group “Antifa” in Portland posing as members of the media amid the crowds to “take advantage of the new ‘press immunity.'”

The man seen in the video, which was initially shared by Blaze TV’s Elijah Riot, was “carrying an openly displayed press badge but has BLM, ACAB, and other Antifa signs on this uniform.”

After issuing repeated warnings not to tamper with the security fence, police declared the gathering a riot around 1 a.m.

The Nike store on Martin Luther King Jr. Blvd. was damaged — windows were smashed and an anarchy symbol and a message reading “Burn This” was spray-painted on the building.

About 200 people also pulled down fencing and blocked streets near the offices of the Portland Police Association, the city’s police union, in north Portland late Saturday, causing Portland Fire & Rescue “to reroute emergency vehicles responding to a residential fire nearby.” 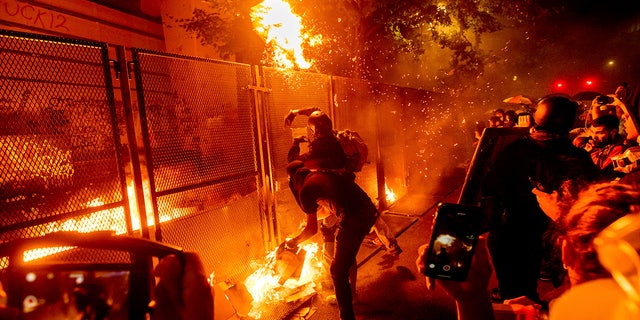 FEDERAL OFFICERS IN PORTLAND MAY HAVE BEEN PERMANENTLY BLINDED BY LASERS, OFFICIALS SAY

“Throughout the night some people in this crowd spent their time shaking the fence around the building, throwing rocks, bottles, and assorted debris over the fence, shining lasers through the fence, firing explosive fireworks into the area blocked by the fence, and using power tools to try to cut through the fence,” Portland Police said in a press release.

Videos taken by Daily Caller reporter Shelby Talcott showed how demonstrators torched upside-down American flags and used an electrical saw and hammer to break down a fence. One sign held by marchers quoted Malcolm X and read: “If you’re not ready to die for it put the word ‘freedom’ out of your vocabulary.”

Massive crowds were also heard chanting messages like “Feds go home” and “Every city, every town, burn the precincts to the ground.”

“We are winning the propaganda war!” one rioter yelled at a line of officer,s according to Talcott.

Before he was gassed by federal agents last week, Portland Mayor Ted Wheeler fought to be heard over a hostile crowd screaming obscenities. Hecklers surrounded him as he left hours later with tear gas chemicals in his eyes after a failed attempt to stand in solidarity with the mob.

Wheeler — who is also the police commissioner — is increasingly unpopular with those who feel he couldn’t, or wouldn’t, control police officers who repeatedly used tear gas weeks before federal officers arrived in the liberal city.

Before the peaceful demonstration escalated into mayhem, Police Bureau Chief Chuck Lovell reiterated in a video message late Saturday that “critical issues” regarding race “have been hijacked by people committing crimes under the cover of crowds.”

“Across the country, people are committing violence supposedly in support of Portland. If you want to support Portland, stop the violence. Work for peace,” Lovell said.

“Now more than ever the Portland Police needs your support,” he continued. “To the men and women of the Portland Police Bureau, your courage is inspiring. Your commitment to this city and to each other is beyond compare. Every day you come to work and give all you have. I can never thank you enough for the sacrifices you and your families have made.

“To those in the community who are fed up and frustrated with the nightly destruction and violence, there are ways to come together with your communities to make your voices heard, especially to those in positions of authority. We have received an outpouring of support from many community members who have felt compelled to reach out with words and messages of kindness.”

There were no immediate reports on injuries and arrests during the riot.