The remnants of Tropical Depression Hanna are still bringing the threat of flooding on Monday, as a video was released from a rescue in Texas over the weekend.

The Texas A&M Task Force said on Facebook that three people were rescued from a sinking vessel on Saturday in Corpus Christi as Hurricane Hanna roared ashore.

Two people in their 80s and a 40-year-old boat owner were rescued as the vessel sank in rough waters and 65 mph winds, officials said.

“The TX-TF1 water rescue squad, comprised of members from Washington County EMS and TX-TF1 Water Group Supervisor Kevin Deramus, arrived as many of the boats in the marina were breaking apart and sinking,” the group said. 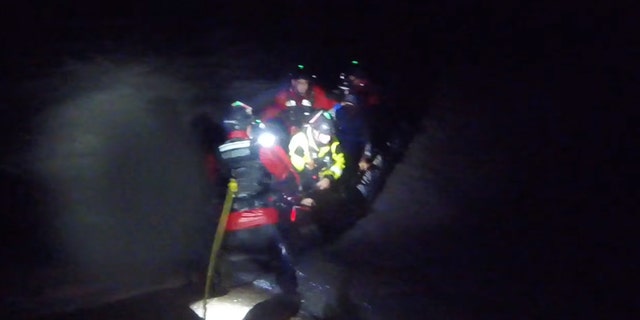 The group released footage of the rescue, which was carried out using an inflatable Zodiac rescue boat on Marina Del Sol.

The rescue was carried out at the request of the U.S. Coast Guard and the Corpus Christi Fire Department.

Hanna blew ashore as a Category 1 hurricane late Saturday afternoon with winds of 90 mph not far from Port Mansfield, located about 130 miles south of Corpus Christi.

Jame Rowles examines the damage after the docks at the marina where his boat was secured were destroyed as Hurricane Hanna made landfall, Saturday, July 25, 2020, in Corpus Christi, Texas. (AP Photo/Eric Gay)

Allen Heath surveys the damage to a private marina after it was hit by Hurricane Hanna, Sunday, July 26, 2020, in Corpus Christi, Texas. (AP Photo/Eric Gay)

Civil protection authorities issued a red alert to residents in Monterrey on Sunday after heavy rainfall from Hanna brought flooding to the city.

A waterway in the city was seen raging in a video posted to Twitter by police based in the city’s northeast, who said the waterway was at 80 percent capacity.

Residents were urged to stay in their homes until authorities declared the danger had passed.

In the Mexican border city of Reynosa, a maternity hospital was damaged by heavy rain, and water had to be pumped out, authorities said.

Some patients had to be moved to upper floors, and a few were evacuated to other hospitals, Pedro Granados, director of civil protection for Tamaulipas state, told the Associated Press.

The threat of additional flooding remains on Monday across South Texas. (Fox News)

Up to 8 inches of additional rain could fall across Northern Mexico, bringing flash flooding and mudslides to the area.

Flash flood watches are still in effect for portions of South Texas.