The hottest temperatures of the year will roast much of the East Coast on Monday as a flood threat goes out for the West from monsoonal moisture.

Heavy rain is possible over parts of the Southwest and Rockies over the next few days, which will cause additional flooding across the region.

Much of this heavy rain is due to the monsoonal flow, which is typical for this time of year.

Flood advisories, watches and warnings remain in effect from the Rockies to the Central Plains. 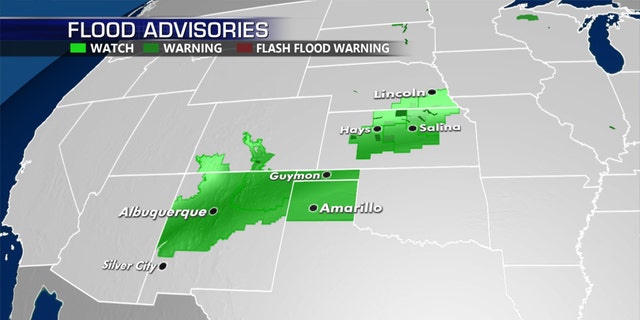 Flood advisories and warnings stretch from the Southwest to the Central Plains. (Fox News)

There’s also a front helping to enhance showers and thunderstorms across the region, adding to flooding problems.

Behind the front, some relief from the heat in terms of cooler temperatures for the central U.S.

What’s left of Tropical Depression Hanna is bringing heavy rain and wind to Mexico. Flash flood watches are still in effect for portions of South Texas.

The threat of additional flooding remains on Monday across South Texas. (Fox News)

Hottest temperatures of the year for Mid-Atlantic, Northeast

Much of the East Coast — from the Carolinas to New England — will see hot and humid conditions on Monday, with the entire Interstate 95 corridor from Washington, D.C., to Boston seeing the hottest weather.

Hot temperatures can be expected on Monday across much of the East Coast.

Air temperatures will range from the upper 90s to near 100 degrees Fahrenheit, with heat indices well into the 100s. Excessive heat warnings and heat advisories in effect across the region.

Temperatures will drop a few degrees Tuesday, with more noticeable relief on Wednesday as they relax to more season highs midweek.

It’s not only the East Coast feeling the heat.

Fire danger remains critical over parts of Northern California and Oregon on Monday, and the Northwest will also feel temperatures ramp up into the 90s and 100-degree range.