A South New Jersey gym was shuttered Monday and its two owners arrested, escalating a battle over the two men’s refusal to comply with Gov. Phil Murphy’s coronavirus restrictions. 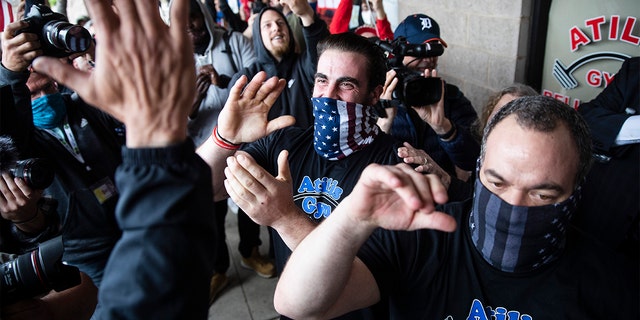 Atilis Gym co-owners Frank Trumbetti, center right, and Ian Smith, center, react after meeting with a police officer outside their gym in Bellmawr, N.J., Monday, May 18, 2020. The gym in New Jersey reopened for business early Monday, defying a state order that shut down nonessential businesses to help stem the spread of the coronavirus. (AP Photo/Matt Rourke)

She said Smith, 33, of Delanco Township, and Trumbetti, 51, of Williamstown, were charged with one count of fourth-degree contempt, one count of obstruction, and one count of violation of a disaster control act.

NEW JERSEY GYM OWNERS ON FIGHTING BACK AGAINST COVID-19 SHUTDOWN: ‘WE REFUSE TO BE LOCKED OUT AND BULLIED’

The contempt charge is a misdemeanor punishable by up to 18 months in jail. The other two charges were disorderly persons summonses.

“From July 24 through July 27, a number of individuals were observed entered and using the gym, a direct violation of the court order,” Mayer said. “Police said both owners refused to leave the gym when asked, leading to the charges.”

Smith and Trumbetti were brought to the Bellmawr Police Department, charged and released.

NJ GYM OPENS IN DEFIANCE OF GOVERNOR’S LOCKDOWN: ‘WE WILL NOT STAND DOWN’

Murphy has eased coronavirus restrictions on some businesses but not gyms.

Smith told Fox & Friends on Saturday that there was no reason to keep them closed.

“We can operate our business safely, responsibly,” he said. “We have shown that to be true. We haven’t had a single case of COVID reported and we have everybody’s records here,” he added. “So, we’re not backing down from this one.”

Smith’s attorney, James Mermigis, told the Newark Star-Ledger the gym was boarded up by authorities Monday and the owners do not have access to get inside.

He said he doesn’t know what Smith and Trumbetti will do next.

Mermigis insisted that keeping New Jersey gyms closed was “unconstitutional,” according to the paper.