Seattle Mayor Jenny Durkan and Councilmembers Alex Pedersen and Debora Juarez have had offensive messages written outside their homes by some protesters who support defunding the city’s police department.

Messages written on a street at Durkan’s home read “Guillotine Jenny” and “Resign Bi—,” according to The Seattle Times. Windows at Pedersen’s home read “F— You” and “Don’t be racist trash.”

Separately, Councilmember Tammy Morales, who has called for the police to be defunded by 50 percent, spoke with demonstrators outside her home Sunday. “I had a brief conversation with a few members of the group that came to my home last night, Morales tweeted Monday. “I appreciate the opportunity to listen to what they had to say. We exchanged numbers and will be talking later today.”

At the home of Juarez, protesters used a bullhorn and spray-painted “corporate bootlicker” on the street. While Pedersen and Juarez support slashing the police budget, they do not support a 50 percent reduction being pushed by some groups, the newspaper reports.

Leaders of several local Native American organizations decried the offensive messages directed at elected leaders, particularly those targeting Juarez, who is a member of the Blackfeet Nation tribe.

“The Suquamish Tribe supports (Juarez) and her right, as an elected official, to do her job without verbal harassment and vandalism at her home,” Leonard Forsman, chairman of the Suquamish Tribe, told The Seattle Times.

None of the elected officials responded to a Fox News request for comment. 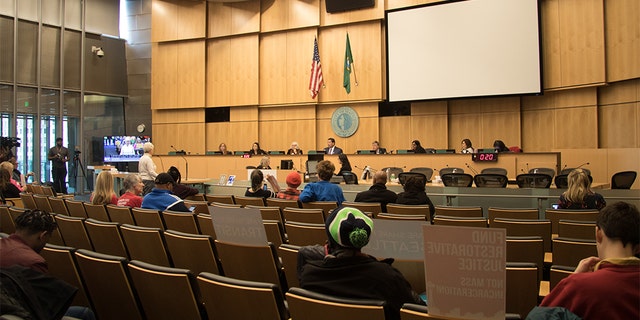 The Seattle City council conducts a meeting in its chambers. Several council members have seen offensive messages written outside their homes in response to their position on defunding the city’s police department. (Seattle City Council)

City Council President Lorena Gonzalez said council members regularly receive misogynistic and racist messages and threats from conservative critics via email and voicemail, according to the Times. She addressed the protests outside the home of leaders last week.

“Demonstrations are a protest tool, but using that tool to create an environment by which people and their family members feel unsafe in their own home is not something I can support,” she said.