Born from thunderstorms, tornadoes can cause immense devastation as they rip apart homes and toss cars like toys.

But just because the terms funnel cloud and tornado are used interchangeably when severe weather happens, doesn’t mean they’re actually the same thing.

The National Oceanic and Atmospheric Administration (NOAA) said a funnel cloud is a rotating column of air that extends from a base of a cloud, but never makes contact with the ground.

WHEN DO TORNADOES TYPICALLY OCCUR? WHAT TO KNOW ABOUT WHEN THE STORMS STRIKE

As long as it doesn’t reach the ground, it remains a funnel cloud. 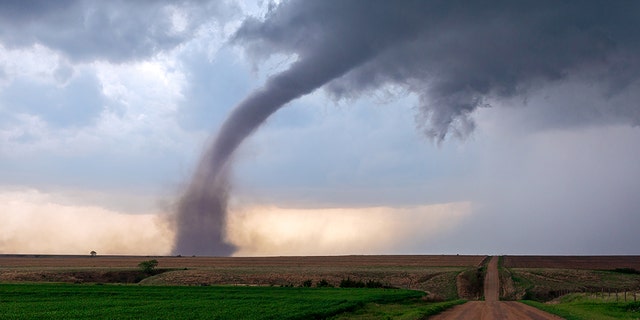 If that funnel cloud makes contact with the ground or has a debris cloud or dust whirl beneath it, then it’s classified as a tornado. (iStock)

If that funnel cloud makes contact with the ground or has a debris cloud or dust whirl beneath it, then it’s classified as a tornado, which can create damage, according to NOAA.

Thunderstorms could produce several funnel clouds, but never a tornado as long as what forms doesn’t touch the ground.

Tornadoes can happen at any time of the year if conditions are right, but there are distinct seasons for twisters in different parts of the county, according to the Storm Prediction Center (SPC).

WHAT WAS THE DEADLIEST TORNADO IN THE US? HERE ARE THE 10 WORST ON RECORD

“There is a general northward shift in ‘tornado season’ in the U.S. from late winter through midsummer,” the SPC says. “The peak period for tornadoes in the Southern Plains, for example, is during May into early June. On the Gulf Coast, it is earlier during the spring; in the Northern Plains and upper Midwest, it is June or July.”

On average, tornadoes kill about 60 people per year, mostly from flying or falling debris. The actual number can vary from single digits to hundreds, depending on both “weather and society” at the time, according to the SPC.