A blazing heat wave along the East Coast in recent days turned deadly in Maryland as another hot day is forecast for Tuesday.

The Maryland Department of Health (MDH) announced Monday that a man in his 30s in Baltimore died due to the heat, the state’s first heat-related death of the year.

“As this tragedy shows, heat-related illnesses, heat exhaustion, and heat stroke can result in serious ailments and even death,” MDH Secretary Robert R. Neall said in a statement. “Especially as we’re seeing higher heat indexes across the state, Marylanders are urged to take precautions to avoid overheating and to know the signs at the onset of any heat-related illness so they can seek medical attention, if necessary.”

Health officials did not identify the man.

Officials in Baltimore had declared a code red extreme heat alert for Monday and Tuesday as heat indices — how it feels with the air temperature and relative humidity — were expected to reach well over 100 degrees in the region. The actual high temperatures on Monday were well into the mid and upper-90s. 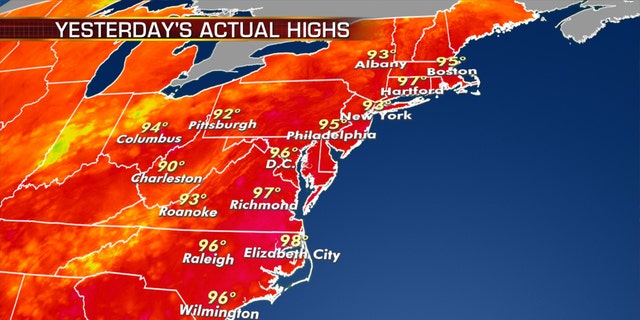 High temperatures on Monday across the East Coast as a heat wave bakes the region. (Fox News)

Cooling centers were opened, and residents were urged to limit activity outdoors.

“Excessive heat is the leading weather-related killer in the United States. The effects of extreme heat are exacerbated in urban areas, especially when combined with high humidity and poor air quality,” Baltimore City Health Commissioner Dr. Letitia Dzirasa said in a statement. “Extreme heat is particularly dangerous for young children, older adults, and those with chronic medical conditions.”

Another day of hot and humid conditions is on tap for Tuesday for the Northeast, with heat indices once again reaching above 100 degrees.

Heat advisories are in effect from North Carolina to southern New England.

A cold front will bring temperatures back to more seasonal warmth for late July starting Wednesday.

It’s not just the East Coast that’s been dealing with the heat.

The Northwest, Southwest, and Great Basin will also see hot weather bringing temperatures to dangerous levels through much of this week.

Red flag warnings are also up for Idaho and Oregon, where the conditions are critical for fire weather danger.

The risk for heavy rain and flash flooding will remain possible on Tuesday for parts of Northern Plains into the Midwest and the Southern Plains toward the Gulf Coast.

Flood watches and warnings stretch throughout the region.

According to the National Weather Service’s (NWS) Weather Prediction Center (WPC), the threat for flash flooding will move eastward over the next couple of days.

Some locations could see as much as 5 inches of rain by the end of the week.

What is a flash flood: Here's what you need to know