A 32-year-old man’s back tattoo of his last name helped authorities track him down in connection to the setting of a fire inside Portland‘s Justice Center during a protest that marked the beginning of weeks of demonstrations.

Thomas Schinzing faces a federal charge of using fire to maliciously damage or destroy the city and county-owned building, the Justice Department said. The facility houses the Portland Police Bureau headquarters and the Multnomah County Detention Center, which held 289 inmates at the time of the May 29 incident. 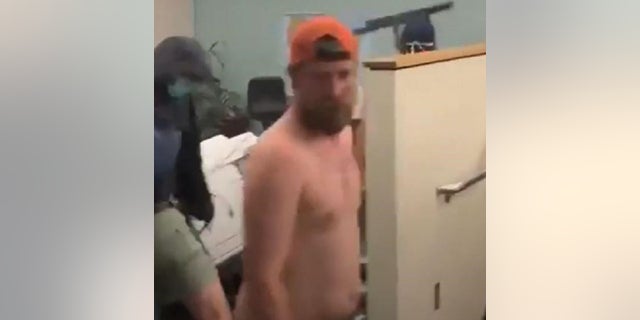 Schinzing was marching with a group of protesters when he arrived at the Justice Center in the city’s downtown just before 11 p.m. At one point, a group of people broke windows near where the Corrections Records Office portion of the building.

Three civilian Multnomah County employees were still inside the records office and “fled for safety as the windows were broken,” authorities said.

Around 30 people entered the building and began vandalizing the inside. They spray-painted portions of the office, damaged computer equipment, furniture and other windows and started a fire.

Photos of a shirtless Schinzing appeared to capture him marching with protesters and setting fire to the pieces of paper in separate cubicles once inside the building.

Damage to a work area inside the Portland Justice Center’s Corrections Records Office. (Department of Justice )

“Schinzing spread a fire that started near the front of the office by lighting additional papers on fire and moving them into a drawer of a separate cubicle,” the Justice Department said.

A sprinkler system extinguished the fires minutes later. Schinzing was identified when investigators compared a previous jail booking photo and a photo of his back tattoo.

Schinzing appeared in federal court Tuesday where he was ordered detained. He faces up to 20 years in prison.

The Oregonian reported he was sentenced in April to five years probation after being found guilty of third-degree assault and attempted fourth-degree assault for punching his girlfriend in the face in front of their 8-year-old son earlier this year.

He reported being homeless for the past two years and has seven misdemeanors and two prior felony convictions, according to the newspaper.

The Justice Center destruction prompted officials to erect a fence around the building, which has since been targeted by protesters for vandalism.