Protests flare up in Tempe, Ariz., and Austin, Texas – as Portland sees its 61st consecutive night of unrest

The 61st night since the death of George Floyd was marked by clashes between police and demonstrators in Portland, Ore., and Tempe, Ariz., while hundreds more gathered in Austin, Texas, for a vigil honoring an AK-47-wielding Black Lives Matter protester gunned down over the weekend.

Monday evening in Portland began with speeches in Lownsdale Square, which sits across the street from where federal officers have been embedded to protect the Mark O. Hatfield U.S. Courthouse. Speakers called for protesters to leave the building alone in order to effect real change against racial injustice.

Myke Tavarres, a former NFL player who frequents rallies in Portland, told the audience: “Burning that building down does not help Black people,” The Oregonian reported. But at another rally outside the Multnomah County Justice Center, Stand for Children organizer Elona Wilson seemed to encourage street demonstrations to continue.

“This needs to be the last civil rights movement,” she told the crowd, adding that the Montgomery bus boycotts lasted 381 days before the Supreme Court ruled segregation of buses illegal.

A fence outside the federal courthouse in Portland has been recently reinforced with concrete and federal agents used a loudspeaker to tell crowds to leave it be.

“This is the Federal Protective Service,” the announcement said, according to the newspaper. “Do not attempt to damage, remove, enter or climb the fence around the federal courthouse. Failure to do so may result in arrest or use of crowd-control munitions.”

Repeated announcements seemed to only energize the crowd. Hundreds had gathered along SW Third Avenue outside the courthouse by 10:20 p.m. For nearly two hours, people threw rocks, bottles and other objects and launched fireworks over the fence and at the door of the courthouse, the Portland Police Bureau said in a statement. Many wore gas masks and helmets, carried signs and were armed with hockey sticks, golf clubs and umbrellas.

Federal officers came outside the building to put out fires and set off tear gas canisters. Some demonstrators used leaf blowers to direct gas away from the crowd. People started a fire inside the fence and continually added wood, garbage and other debris to build it up. After midnight, a person threw a Molotov cocktail against the front door of the courthouse, “which burst into a fireball when it struck the building, causing a report to be heard and felt more than a block away,” police said. 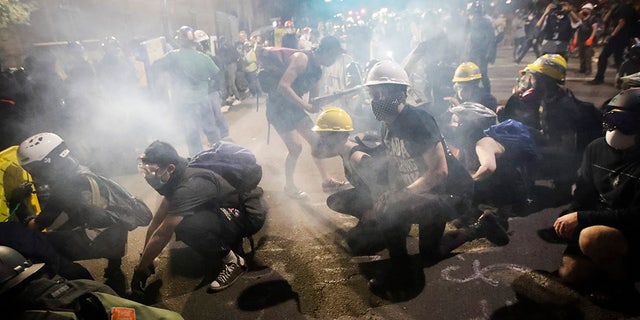 Meanwhile, in Texas, protesters gathered outside the Austin police headquarters Monday night and marched to the corner of Fourth Street and Congress Avenue, where they knelt in silence to honor Garrett Foster, The Statesman reported.

Foster was carrying his AK-47 during a Black Lives Matter march Saturday night when a motorist opened fire with his handgun from inside the car. Foster was shot and rushed to the hospital, where he later died. Another person in the crowd used a handgun to shoot at the vehicle as it peeled off.

The driver told police that the crowd of protesters had surrounded his vehicle and struck his car. He also claimed that Foster pointed his rifle at him, Austin Police Chief Brian Manley said on Sunday. Other witnesses and protesters in the crowd that night maintain that they did not approach the vehicle and that Foster did not point his gun at the motorist before he was shot. Some say that the motorist drove his vehicle at the crowd menacingly. The investigation into the incident is ongoing.

Both the driver, whose name has not been released by authorities, and the other person who fired at his vehicle were taken into custody for questioning and were later released. Both have state-issued gun licenses. Texas is an open-carry state for both pistols and long guns and protesters are often seen carrying firearms during demonstrations.

Before he was killed, Foster ran into independent journalist Hiram Gilberto amid the crowd.

“They don’t let us march in the streets anymore, so I got to practice some of our rights,” Foster said on a social media live stream. “If I use it against the cops, I’m dead.”

A protest began around 5 p.m. at Tempe Beach Park before crowds left sidewalks and marched through street traffic onto the bridge over Tempe Town Lake, AZ Family reported.

“Protesters/demonstrators continue to exercise their First Amendment Right as they make their way east towards Scottsdale Rd. Participants will NOT be allowed to enter the roadway on Scottsdale Rd in either direction and MUST remain on the sidewalk,” Tempe Police tweeted.

People moved toward officers on bicycles and began pelting them with projectiles and shouting profanities, the newspaper reported. Police then used pepper spray to disperse a crowd blocking an intersection. One officer suffered a laceration to the face and required medical attention.

“It is unacceptable to hurl projectiles at people — cops are people there to protect free expression and provide public safety. When you throw objects at them, that is NOT OK,” Tempe Police Chief Sylvia Moir tweeted.

Officers were also seen tackling a man wearing a football helmet and carrying a skateboard. Other demonstrators held umbrellas to disguise their identity and block chemical agents.