What is a flash flood: Here's what you need to know

When heavy rain falls, the risk of flooding usually comes shortly after.

But there is a key difference between the terms “flood” and “flash flood.”

According to the National Weather Service (NWS), flash flooding is a type of flood that’s caused by heavy rainfall, typically from thunderstorms.

What makes a flash flood different is that it often begins within three hours of heavy rainfall, as opposed to a traditional flood that may take days to materialize.

“Flash floods are usually characterized by raging torrents after heavy rains that rip through river beds, urban streets, or mountain canyons sweeping everything before them,” the NWS states. “They can occur within minutes or a few hours of excessive rainfall.”

While thunderstorms are the main culprit in causing flash flooding, they can also occur due to dam or levee breaks, as it happened in Michigan in May 2020, or as debris flows from mudslides.

Factors such as the location, intensity of the rainfall, and topography can also influence where water runs.

In Arizona, for example, light rain can produce devastating flash floods and mudflows miles away from where precipitation is actually falling.

WHAT IS A SQUALL LINE? WHAT TO KNOW ABOUT THIS THREATENING WEATHER

“Flash flooding occurs so quickly that people are caught off-guard,” the NWS states. “Their situation may become dangerous if they encounter high, fast-moving water while traveling.”

Some areas are more susceptible than others

While flash flooding can happen virtually anywhere, some areas are especially vulnerable to experiencing it. 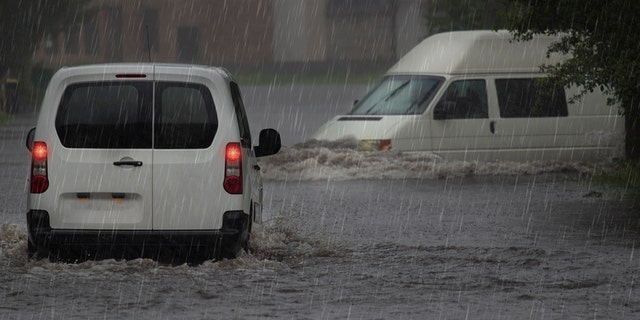 In urban areas, rainfall happening in a short time span can overwhelm storm drainage systems, triggering flooding that’s faster or more severe than in the suburbs or a rural area.

“The impervious surfaces in the urban areas do not allow water to infiltrate the ground, and the water runs off to the low spots very quickly,” the NWS explains.

Such incidents can cause property damage in addition to trapping people in their vehicles or homes.

Flash flooding is also common when heavy rain happens in canyons out West in states such as Utah, where desert rains can be dangerous because the hard earth doesn’t soak up much water.

Instead, the rain collects quickly, often filling narrow slot canyons like a bathtub. The tall, undulating walls have few exits for any hikers inside when the weather hits, quickly turning a casual hike into a dangerous situation.

Two sisters in Utah were killed in May 2020 when a strong thunderstorm unleashed flash flooding in a slot canyon, taking the body of one child 28 miles downstream.

In 2015, seven hikers died when a storm sent water rushing into a slot canyon in southern Utah’s Zion National Park. Floodwaters also killed a dozen people in a polygamous town on the Utah-Arizona border that year.