The family of George Floyd on Tuesday attended an unveiling of a high-tech memorial to the slain Black man projected over the Robert E. Lee statue on Richmond’s Monument Avenue.

Floyd’s family traveled to what was once the capital of the Confederacy to unveil the holographic portrait of him in an iconic spot that celebrated the Southern general.

“We’re here to share this special moment for my brother,” Rodney Floyd said as the hologram played on a screen in front of Lee’s statue. “Right now, right here, this is a beautiful scene.”

Floyd’s death in May at the hands of a white Minneapolis police officer has touched off protests around the country over racial injustice and police brutality. 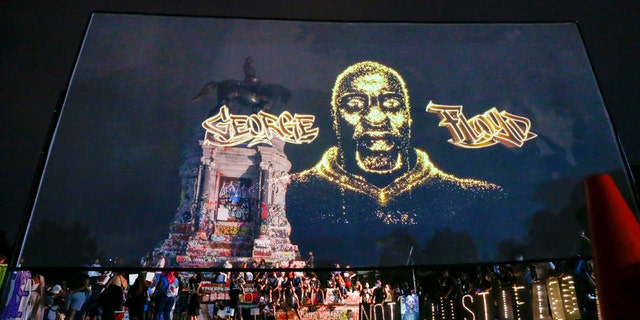 An image of George Floyd is projected on a screen in front of the statue of Confederate General Robert E. Lee on Monument Avenue Tuesday July 28, 2020, in Richmond, Va.  (AP)

The memorial was the first public unveiling of the George Floyd Hologram Memorial Project, which aims to “transform spaces that were formerly occupied by racist symbols of America’s dark Confederate past into a message of hope, solidarity and forward-thinking change.”

The project’s week-long tour will take it to a number of cities across North Carolina and Georgia, mirroring the route of the 1961 Freedom Rides.

The Freedom Rides were a series of political protests against segregation by White and Black Americans who rode buses together through the South in 1961.

“We wanted to do something really bold and capture the attention of the world,” Alaina Curry, a spokeswoman for Change.org, which sponsored the event with the George Floyd Foundation, said. “We were trying to think of ways to continue to amplify this message of not just George Floyd, but of racial injustice and equality, and this hologram idea came about.”