The dog days of summer are roasting the nation’s capital.

That marked the 27th day for July that it has reached at least 90 degrees, adding to a record that was broken on Wednesday.

Temperatures reached 92 in Baltimore, marking the 24th day this month it’s reached above 90 in Charm City.

“This ties the record for most days in ANY month (also occurred in July 2011),” the NWS tweeted. 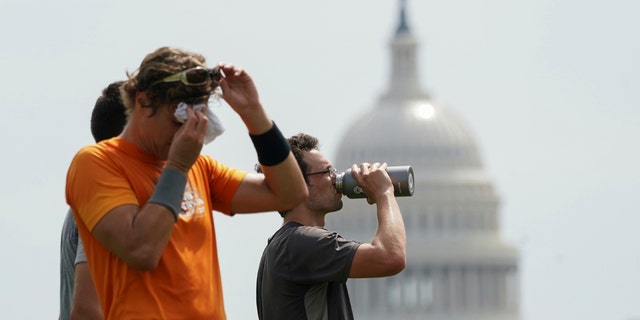 With the U.S. Capitol in the background, players cool off after a game of ultimate frisbee on the National Mall during a heat wave in Washington, U.S., July 20, 2020. (REUTERS/Kevin Lamarque)

The heat wave that’s been roasting the region turned deadly in recent days.

The Maryland Department of Health (MDH) announced Monday that a man in his 30s in Baltimore died due to the heat, the state’s first heat-related death of the year.

Another hot day is on tap for the East Coast on Wednesday. (Fox News)

Slight relief can be expected from the heat and humidity across the region.

“The East Coast, still warm and humid, however not as warm and humid as it’s been over the last several days.,” Fox News senior meteorologist Janice Dean said Wednesday. “A cold front will bring those temperatures down a few degrees.”

While not quite as hot as the last couple of days, temperatures will remain above average in the 90’s from the Mid-Atlantic to New England on Wednesday, with less humidity across the Northeast and New England.

It’s not just the East Coast feeling the heat.

Record heat is possible across the Southwest on Wednesday. (Fox News)

Excessive heat has returned to the Southwest and the interior Northwest where temperatures will be at dangerous levels on Wednesday.

Record high temperatures will be possible over the Desert Southwest, with highs surpassing 110 degrees.

Excessive heat warnings and advisories have been posted throughout the region

As the coasts deal with summer heat, flooding is still developing over the central part of the country.

Heavy rain will also be possible for states across Central Plains, the Mid Mississippi and Tennessee River Valleys.

Flash flood watches have been posted in the area.