A county Republican board member in southern Minnesota has resigned after posting on Facebook an image that compares the state’s mask mandate to the Nazi regime forcing Jewish people to wear star badges during World War II.

The Wabasha County Republican Party MN Facebook page posted a meme on Tuesday depicting a Nazi soldier face-to-face with a Jewish man wearing the Star of David on his jacket during the Holocaust. “Just put on the star and quit complaining. It’s really not that hard,” is written over the image. Beneath it, another message reads: “Just put on the mask and stop complaining.”

The photo was an apparent reference to the mask mandate imposed by Democratic Gov. Tim Walz.

The Wabasha County GOP initially said its Facebook page might have been hacked and both the post and the account was taken down. But Minnesota Republican Party Chairwoman Jennifer Carnahan said later Tuesday that further investigation revealed the picture was posted by a Wabasha County GOP board member, who has since resigned at the party’s request. 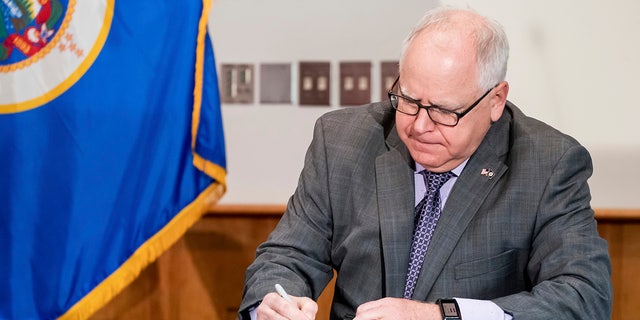 The photo was an apparent reference to the mask mandate imposed by Democrat Gov. Tim Walz. (pictured<br data-cke-eol=”1″> (Star Tribune/AP)

“Upon further investigation today, the Republican Party of Minnesota has learned the Wabasha County Facebook page was not hacked last night, as believed by the Wabasha County Chair,” Carnahan said in a statement, according to WCCO.

“The offensive picture was unfortunately posted by a board member who has resigned effective immediately at the party’s request.  We are saddened by the vitriolic post and hope as we move forward that Republicans and Democrats alike will maintain the highest level of integrity, respect, and sensitivity. The Wabasha County Board and MN GOP apologizes for this disappointing post.”

The county board member responsible for the post was not identified. The meme received a number of negative comments and drew a response from the Jewish Community Relations Council.

“It’s a disgrace to the memory of WWII veterans as well as survivors of the Holocaust and anybody that fought,” Steve Hunegs, executive director of the Jewish Community Relations Council of Minnesota and the Dakotas, told the Associated Press.

Jewish Community Action also shared a screenshot of the post and asked the Minnesota GOP to “tell Wabasha Republicans to stop using imagery like this” because “it betrays a total lack of both empathy and education.”

“Given that Minnesota rabbis recently spoke out in favor of a mask mandate, comparing that mandate to the Holocaust feels especially disgusting,” the group tweeted.

Chairman of the Minnesota Democratic-Farmer-Labor Party, Ken Martin, said such rhetoric risks driving up non-compliance rates so the virus may spread more easily. In a statement, the state Democratic Party said the Wabasha County post wasn’t the only instance of the Republican Party linking a mask requirement to Nazism, citing recent remarks by a pair of legislative candidates. The party also cited a tweet by Carnahan that likened Walz to North Korean dictator Kim Jong Un.

Daily deaths from complications caused by COVID-19 have been in the single digits for the past six weeks in Minnesota, though hospitalizations and ICU cases are on the upswing, MPR News radio reported. On Wednesday, the state recorded at least 52,321 confirmed cases, with at least 1,620 deaths.