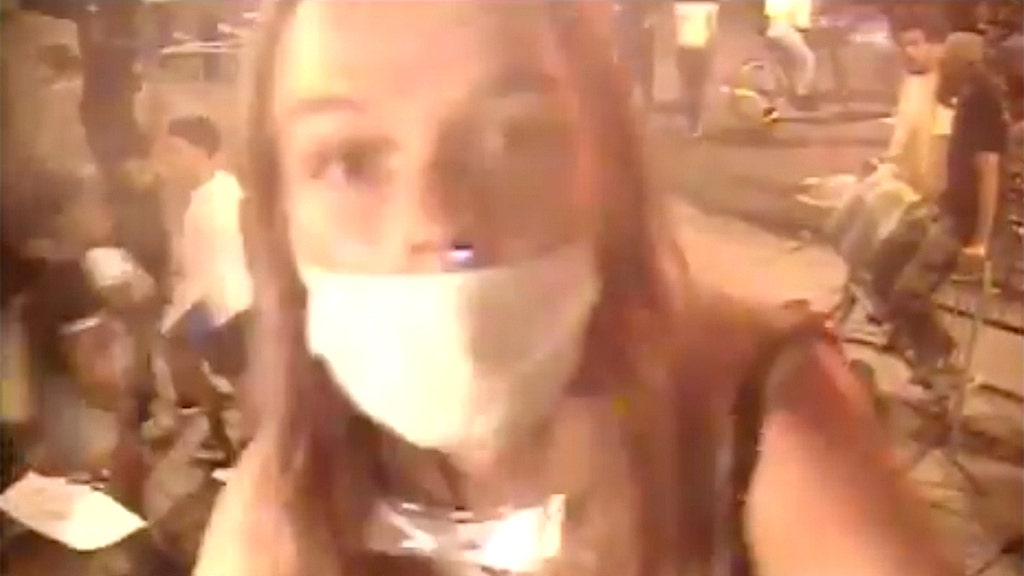 The New York Police Department has released new video footage that appears to show the woman who was controversially arrested by plainclothes officers in Manhattan after she allegedly damaged city-owned surveillance cameras on five separate occasions, officials said.

The NYPD’s Chief of Detectives Rodney Harrison shared the video on Wednesday showing a person who appears to be the woman, identified by several social media accounts and reports as an 18-year-old transgender woman named Nikki Stone, allegedly damaging police cameras using spray paint and a broom, among other items.

“The NYPD welcomes peaceful protests,” states a message included in the 49-second video. “However, damage to NYPD technology that helps keep this city safe will never be tolerated. These cameras are vital resources which help prevent and solve crimes throughout the city.”

Stone’s arrest on Tuesday caused an uproar on social media and among some public and elected officials who questioned why she was being taken into custody during a protest, and why she was pulled into an unmarked minivan.

Video of Stone’s arrest circulated on social media showing her being pulled into the vehicle by plainclothes police officers during a protest in the area of Second Avenue and East 25th Street, as more officers order bystanders to stay back.

In a series of statements released after the arrest, police said that Stone “was wanted for damaging police cameras during 5 separate criminal incidents in & around City Hall Park.”

Police also said the officers at the scene were “assaulted with rocks and bottles.”

Stone was released hours later on charges of criminal mischief and making graffiti for the alleged damage to the cameras, which police said occurred in June and July.

During his daily press conference on Wednesday, New York City Mayor Bill de Blasio was asked why it was “specifically desirable” for the NYPD to make the arrest at the time and place that it was executed.

“It was not specifically desirable to do so,” he said, later adding: “I think it was the wrong time and the wrong place to effectuate that arrest … No one is allowed to damage police property. That is a real offense, that is an offense that can lead to an arrest, and my message to everyone: if you’re out there protesting, protest peacefully.”

When asked about the NYPD’s statement that officers had been assaulted with bottles and rocks, which some reports have disputed, de Blasio said he did not yet have the details regarding the claims.

“I’ve seen plenty of evidence unfortunately of rocks being thrown at officers, bottles being thrown at officers, all sorts of efforts to harm officers,” he said, noting that the “vast majority” have been peaceful. “The relative few who have engaged in violence have created a problem for everyone … in this particular case, we should certainly review it. If there’s something that’s not accurate, we need to correct it.”

Police said 11 other people were arrested on Tuesday, 10 of whom were men charged with obstructing governmental administration. The 11th person, a woman, was charged with criminal mischief. They all received desk-appearance tickets, police said.

Information provided by police indicates Stone lived in Chinatown, roughly two miles from where she was arrested, but several reports and a GoFundMe page reportedly set up for Stone show she is homeless.

The Daily Mail reported that a fundraising page called “Housing for Sticks” was created to help Stone, who, according to the GoFundMe page, is “in need of housing within the next two weeks.”

“She is in need of money for rent for several months as she finds a source of stable income,” the page further states. As of noon, more than $25,500 had been raised.